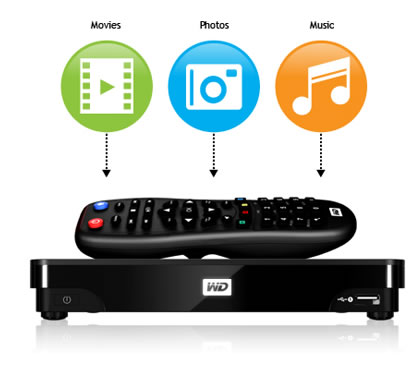 If you’re not quite impressed with Apple or Google’s high-profile set-top boxes, this new one from Western Digital could just prove to be your cup of tea.  Called the TV Live Hub, it puts a beefy hard drive into a small box, loaded with standalone media playback and streaming capabilities.

Think of it like WD’s MyBook external hard drive, except with a whole bundle of features included for an extra $70.  For just that much extra cash, you get to hook it up to your TV and play media files directly from the disk.  It can also stream  content from Netflix, Pandora, Flickr, MediaFly and YouTube, as well as upload media to your Facebook account, all while you control it from the couch.

The Western Digital TV Live Hub has 1TB of onboard storage, giving you a huge swath of space to dump all those files you’ve been snagging off torrents and wherever else.  You probably won’t need to do any encoding conversions either, since it can handle more formats than I’d care to remember (seriously, video from Xvid to MKV to WMV, all the way up to 1080p).

Want a media server?  It can serve the role, too.  Stream content to PCs, Macs, Blu-ray players, consoles and whatever else you have going in your entertainment setup.  Suffice to say, the only thing that seems to be missing is a built-in browser, but isn’t that what you bought the iPad for?

Granted, the UI might be the one thing that won’t stand up to either Apple’s or Google’s offerings, but the Western Digital TV Live Hub does sound impressive all on its own.  Especially, since they’re selling it an affordable-sounding $199.99.