Wibit Sports Park 60 Is Your Own Personal Waterpark 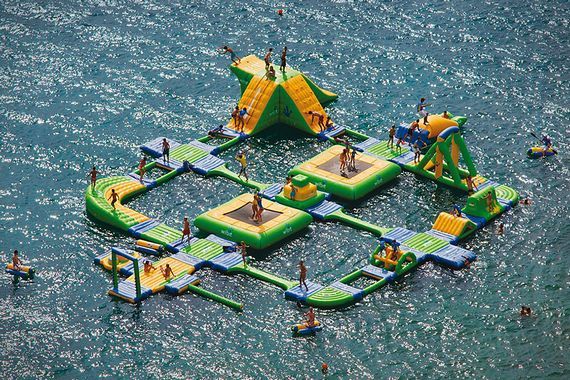 You own an island in the Carribean that you’ve converted into a mad scientist laboratory.  And you’ve grown tired of the mad scientist grind.  Nowadays, you just want to turn that obscure, nefarious island lair into a resort paradise.  The Wibit Sports Park 60 should be a good first step (or a good second step, if you’ve already installed a Candocks system).

An inflatable structure, it’s a literal playground that you can set up in the water, turning your side of the beach into a mini-waterpark.  Now, all you need to do is figure out a way to bring guests into your newly-minted floating playground.  Considering you chose your mad scientist headquarters for being inaccessible to most of the outside world, good luck on that. 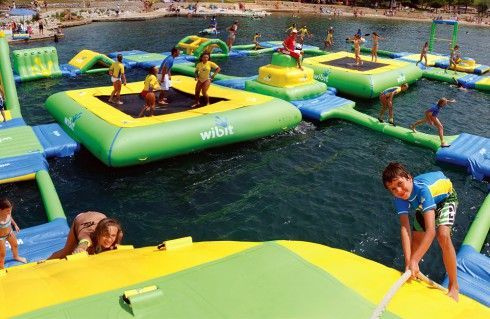 The Wibit Sports Park 60 measures a massive 131.2 x 105 x 9.8 feet when fully pieced together.  At that size, you know blowing into the thing to inflate it won’t work — instead, it comes with seven electric pumps that will have it fully blown up in three hours.  When ready, it gives you access to a giant cliff to dive from, a slide, four mini-ponds, a pair of trampolines, multiple balance beams, a swing, an “action tower” and more.  It also includes 18 buoys to help you put a mark on your vicinity.

A minimum water depth of 8.2 feet is required to set it up, so just a short distance from the shore will suffice.  The entire thing weighs a hefty 3968 pounds before being blown up, though, so make sure you have frankensteined enough muscled-up henchmen to do the lifting before setting up your island resort.

No pricing available for the Wibit Sports Park 60 yet, but expect it to be very expensive.