Wii Maracas: There’s A Maracas-Based Game For The Wii?!? 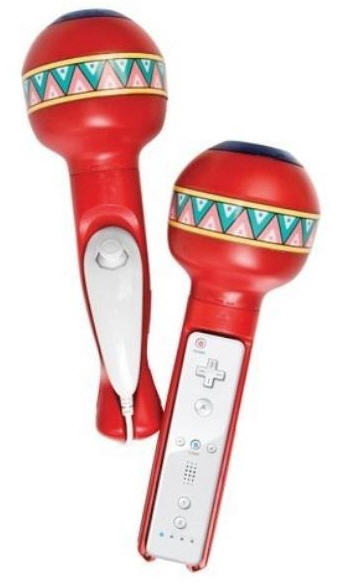 Invested your wealth in a ton of maracas, thinking it was going to be the hit instrument of 2005?  Turn them into a controller for the console with the most accessories ever and finally eke out a profit from your inventory, like these guys did.

The Maracas for Wii is a real musical instrument with a big rattle filled with plastic pellets.  Yep, it’s going to make real noise music when you shake it, so you can jam with your friends even without a gaming console nearby.  Fancy a round of your favorite Maracas-based video game?  Slip the Wiimote and the nunchuk on the handle slots (it comes in pairs, with fit-to-size controller bays for both) and shake it.

As it turns out, there’s at least one: Samba de Amigo, released for the Wii in 2008.  Gameplay, based on the Wikipedia page, appears to be similar to modern music games, where you must hit the set notes to score and advance into the next stage.  Sounds like a fun title for kids, actually.

Now that we’ve discovered an actual in-game use for this glorified plastic rattle, I can think of at least three reasons why it’s a smarter holiday gift alternative.