Play Wii Games From USB Storage With The WODE Jukebox 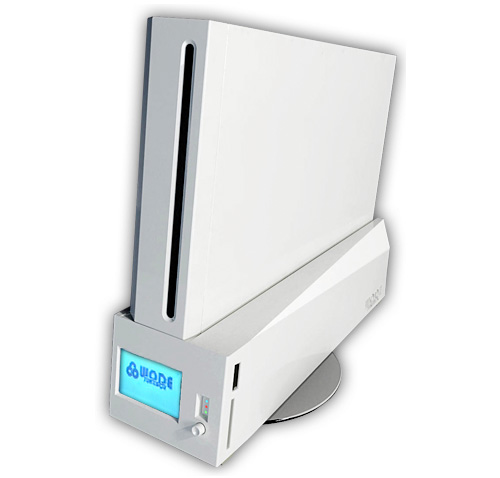 Want to run backups and imported games (and, let’s be honest, pirated stuff) on the Wii without adding a mod chip? Turns out it’s possible with the WODE (Wii Optical Drive Emulator) Jukebox, a hardware stand for the Wii that lets you connect a USB storage and have the console treat it like a regular optical disc.

That means you can plug in an external hard drive filled with ISOs of all your favorite games and have them running on the console without getting up to pop a disc every time. Beautiful, right? Throw in your slew of homebrewed crap in there too, from emulators to non-official games, and you can have a Wii party while staying firmly on your butt.

Of course, you can download games from your favorite torrent sites and play them like you bought them, as well, all without having to fiddle with adding a mod chip to the motherboard. Not that we condone that sort of stuff, of course, because that’s illegal. And it hurts Mario. Makes very sad. Boo-hoo.

The WODE Jukebox comes with a monochrome panel and a tiny joystick on the body, allowing you to choose what titles you’d like to load from storage. You can also do that from the screen, either via the GameCube menu interface or a homebrew WODE menu. Aside from a USB interface, you can load ISOs through a microSD slot too.

You’ll need to open up the Wii and swap some ribbon cables to get it to run, but that’s considerably less work than the prospect of soldering a chip. Other notable features include disc ripping to WBFS, USB WiFi & Samba streaming, and USB hub support (yep, you can plug in multiple hard disks).

Seriously, the WODE Jukebox is a must-have for folks who want the convenience of playing Wii games from backups, including imports. It’s currently on pre-order for $95.