Win A Millionaire’s Life For £20 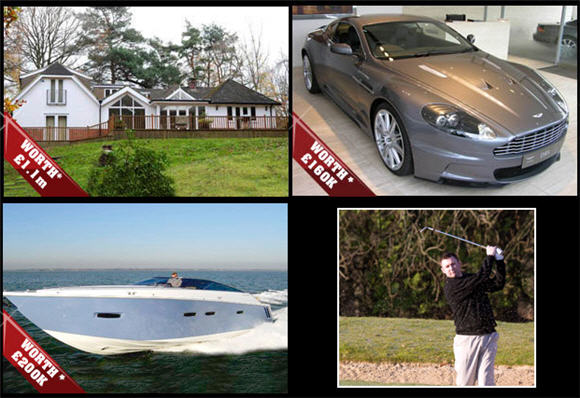 Tired of your life?  How about replacing it with English banker Andrew Paul’s, who lives in a £1.1 million five-bedroom abode, drives a £160,000 Aston Martin DBS and spends weekends on a £200,000 Sealine 35 Sport motor boat?  That’s what you’ll get a chance of doing if you end up with the first prize on Win A New Life, a raffle that the millionaire is putting together to get his luxury belongings off the market.

For the price of a £20 ticket, you’ll be entered in a draw with 200,000 entries, the winner of which will get all of the above plus £85,000 to cover legal fees and insurance for the car and the boat.  In case you’d rather not live such a lavish lifestyle, you can also opt for just £1 million in cash instead.

Recently divorced, savvy businessman Andrew Paul is hoping to get rid of the aforementioned assets because they hold “too many painful memories.”  With the market being what is, though, he knows that unloading of such luxury items won’t be easy, likely fetching him less than what they’re really worth.  To solve the dilemma, he’s decided to raffle them off, hoping to get between 150,000 to 200,000 potential winners before he holds the draw.

If you do the math, 200,000 raffle entries means £4 million, a nice chunk of profit for Andrew if he can pull it off.  With long lines daily at the local Lotto outlet, I’m pretty sure 200,000 takers over the internet won’t be too hard of a sell.  Interested parties can join up to August 9 or until he reaches the 200,000 entrants, whichever comes first.