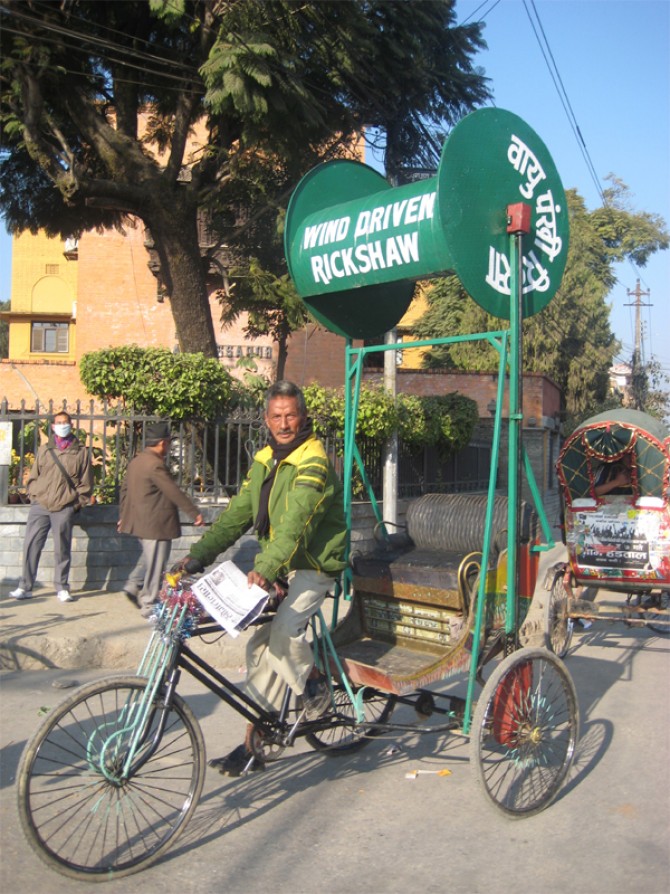 Hybrid rickshaws combining pedaling with some form of electric powertrain is nothing new. The Wind-Driven Rickshaw, on the other hand, does the hybrid thing in a less sophisticated manner. Looking to ease the strain that the pedal pushing puts on the driver’s legs, the vehicle uses the wind to help propel it forward.

According to the driver, who uses it to ferry passengers around the streets of Kathmandu in Nepal, he commissioned the wind-powered mechanism from a university professor who lived next town. It doesn’t look any less ghetto than other pedicabs I’ve seen, but the simple addition of the human-cum-nature rigging reportedly helps it plenty.

The Wind-Driven Rickshaw uses a windmill made from a steel drum container to provide the added thrust. Connected to the rear wheel using a side-mounted gear, it delivers extra push when pedaling in a tailwind, allowing the driver to use up less effort when hitting the pedals.

Clever, right?  So why aren’t all pedicabs doing the same thing? I imagine it has to do with the additional heft from a steel drum, which makes the vehicle heavier. Sure, the wind can make up for it when you’re traveling in the same direction, but how about when you’re going the other way?  Hopefully, that’s been taken into account.