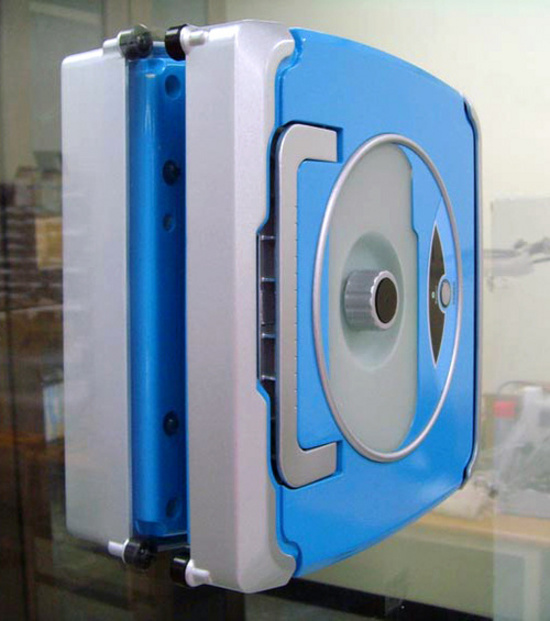 Roomba, meet your future companion.  Called the Windoro, it’s a vertical-climbing robot that can clean windows on its own.   Even better, it does the polishing duties on both sides at the same time.

Created by a team in South Korea’s Pohang Institute of Intelligent Robotics, the window-cleaning automaton is intended to replace current practices of having people do the risky job of polishing the panes up in high-rise buildings.  It can tidy up glass between 10 to 25 mm in thickness, which should cover most commercially-installed single-pane window panels.

The Windoro consists of two identical parts, with each one designed to work their polishing duties on either side of the glass.  Both components do their cleaning in unison, sticking to either side of the same spot using onboard neodymium magnets that keep them attached to the glass.  It uses distance and obstacle detection sensors to identify when to change directions, with an altitude sensor that allows it to adjust its hold to keep the robot from falling to the ground.

Cleaning consists of spraying detergent on the window, with a series of spinning pads doing the necessary scrubbing.  No word on how well it cleans, but it’s a robot, so we’re pretty sure they can beef up its cleaning power as necessary.

Development for the Windoro cost the team approximately 300 million KRW (around $260,000 USD).  It’s reportedly being readied for commercial production starting 2011.