This Is How You Tailgate In Style: The Winnebago Tour – Hawkeye Edition 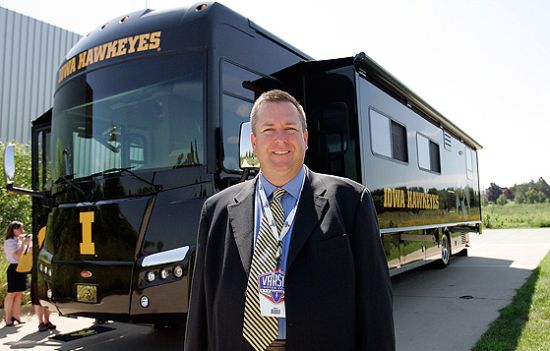 We’re not sure how loaded the pockets of collegiate sports fans are, but Varsity Motor Coach is going ahead and building a fleet of tailgating machines specifically for them.  First vehicle off the lot is called the Winnebago Tour – Hawkeye Edition, a 40-foot luxury coach, decked in licensed University of Iowa Hawkeyes branding both inside and out.

Owner Bill Rieckhoff calls  it plenty of affectionate things, including “the ultimate tailgating machine” and a “motorized man cave.”  Any way you put it, it’s a monstrous party on wheels that’s bound to command attention in any stadium lot you park it. 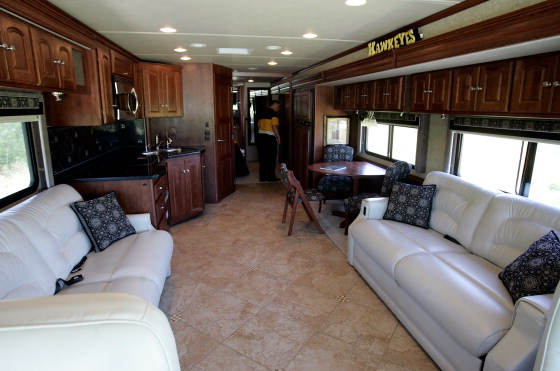 Two models of the giant tailgaters will be available.  The first, where the new Hawkeye vehicle belongs to, is called the Varsity All-Conference, a 40-foot diesel coach with a 400-horsepower Cummins turbocharged engine.  Features include a customizable relaxation lounge, 1.5 bathrooms, fully-integrated electronics, an exterior entertainment center (TV, game consoles and sound systems), and an outdoor beverage and food service area (beer taps, picnic tables, grills and the works).

The second model is called the Varsity Letterwinner, a 38-foot coach with a 362-horsepower gasoline-based Ford engine.  It features similar amenities as the All-Conference, with a bit less room, of course.  All basic vehicles are sourced from Winnebago Industries, with custom work for the interior, finishing, tailgating and entertainment equipment done at the Interior Source/Cambrian Granite of Cedar Falls. 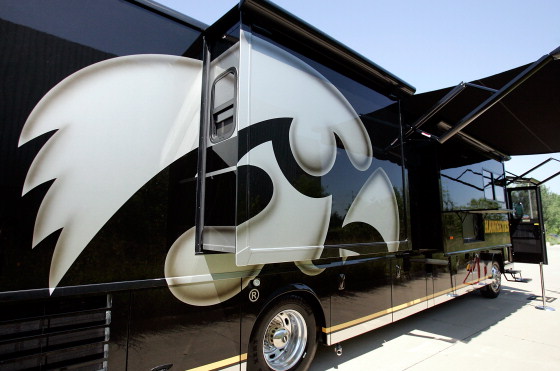 Like all luxury entertainment vehicles, the roster ain’t cheap.  The Varsity All-Conference retails between $350,000 and $425,000, with pricing for the cheaper Varsity Letterwinner to be announced around September.  They are now taking orders for the Hawkeye Edition, with deliveries slated for 2011.