As awesome as today’s smartphones and tablets are, their built-in speakers are usually a letdown.  If you want to pipe your tunes out loud while away from home, these ten mobile speakers are your best bet for avoiding disappointment. 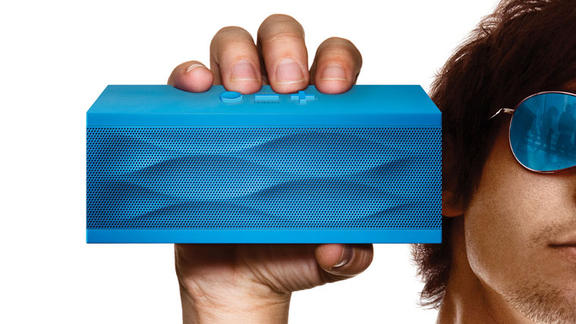 While it was technically released back in November of 2010, the Jambox remains one of the most crave worthy mobile speaker creations in the market today.  With nearly every review we’ve seen the entire year singing its praises, it’s hard not to lust after this audio accessory.  Plus, it’s about as pretty a block of sound equipment as I’ve seen.  Features include output capacity of 85 decibels, an onboard 800mAh battery (rated at 10 hours of playtime), Bluetooth support and speakerphone capability.  Comes in a host of attractive colors, too.  [Amazon] 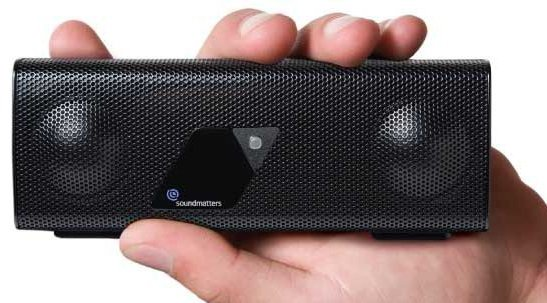 While it’s not as pretty as the Jambox, the foxL v2 (yep, this is the second version) remains one of the best-sounding players in the category.  It could prove a better speakerphone, too, with dual mics to ensure even better pickup of what you’re saying.   Features include the patented “Twoofer” hardware, pocket-friendly size (5.6 x 1.4 x 2.2 inches), enhanced bass sound using the “BassBattery” tech, and an onboard battery rated at up to 12 hours of playback (note: the BassBattery will sap that juce time considerably). [Thinkgeek] 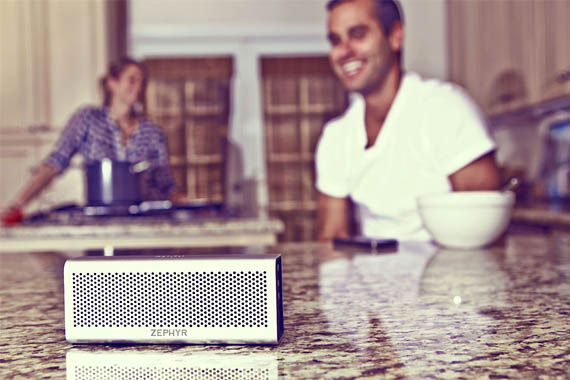 Yep, it’s another “soundbar.”  What it lacks in originality, though, the Zephyr 550 makes up for in execution.  Clad in an aircraft-grade anodized aluminum case, it features dual 1.5w speakers, a 3,000mAh onboard battery (good for 28 hours of play), Bluetooth 2.1, speakerphone capability and a pair of USB ports for charging your mobile phones on the go (yep, it doubles as a backup battery, too).   Unfortunately, the speakers were featured on an Ellen episode and are now sold out.  New units are due out Spring 2012.  [Spar]

Granted, the blocky shape doesn’t quite make it the most convenient for portability (you’ll need a bag for this).  If you can get past that, though, you will definitely appreciate the Play 360’s omnidirectional audio that you can stream wirelessly over Bluetooth.  More notably, it’s the first speaker we’ve seen to bundle NFC, making pairing with a similarly-equipped smartphone just a matter of tapping the gadgets to each other.  Even better, if you get two Play 360s together, they will sense each other through NFC and automatically switch into stereo mode.  [Nokia] 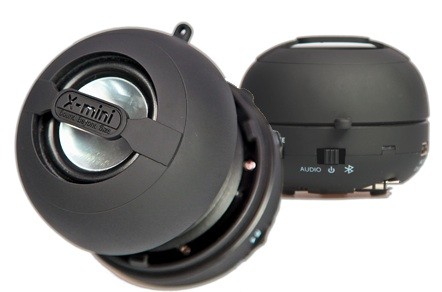 Yep, it still looks like the same X-mini as the rest of the speakers in the line.  The KAI model, though, adds wireless streaming over Bluetooth to the equation.  As with other speakers it shares the brand with, this one can bundle into a really compact size (fits in your palm) and supports daisy-chaining with other X-minis to build a louder wall of sound.  Because of the Bluetooth addition, this model also packs a mic for use as a speakerphone, complete with teleconferencing support. Yes, it looks as cute as ever.  [X-mini] 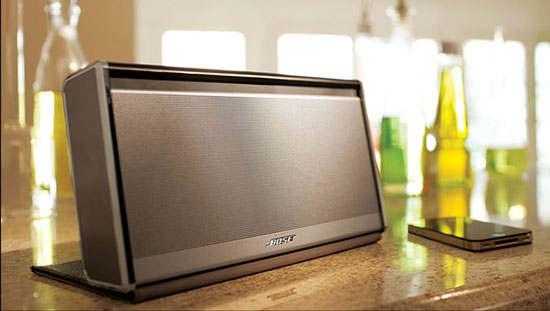 While there’s no way the Soundlink will fit in your pocket, the design makes it just as easy to take along — it comes in a boxy form factor that lets you carry it like a slightly oversized paperback or a netbook (about 9 inches long).  It comes with a built-in cover that secures the hardware when you take it on the road, apart from offering resistance to salt-fog, sand, wind, moisture and repeated drops.  Bose claims the wireless speaker has been engineered to reproduce “full-range audio from a single, hand-held enclosure,” giving it clear high- and mid-frequencies, as well as deep low notes.   Onboard battery is rated for 8 hours.  [Amazon] 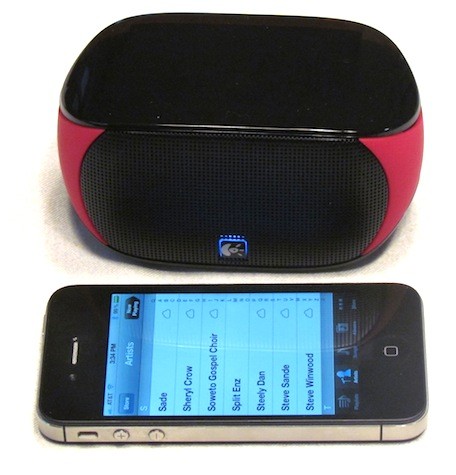 Measuring the size of three (maybe four) iPhones stacked together, the Mini Boombox doesn’t have the most convenient form factor, although you can definitely hold it in one hand even without a handle.  Features of the Bluetooth-armed speaker include a specially-enhanced acoustic chamber for enhanced bass sound, a backlit touch panel on top for controls, onboard rechargeable battery rated at 10 hours, and speakerphone capability.  We like the more affordable $99 pricing, too. [Amazon] 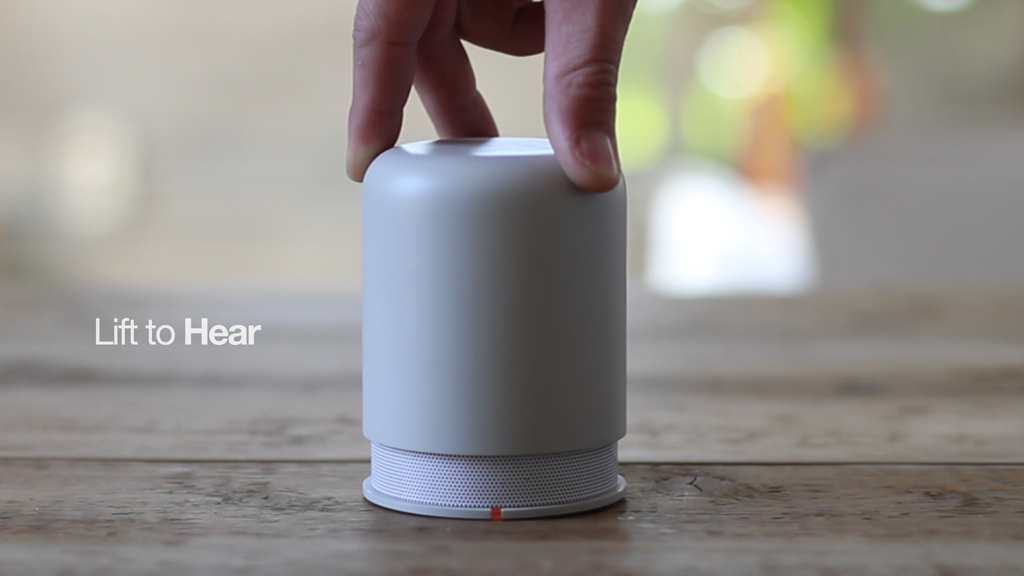 We’re not sure why you would want a portable speaker that looks as inconspicuous as this one, but we can’t help but gush over the minimalistic, elegant design.  When turned off, it literally looks just like a cup turned over.  And when playing, it barely registers either, with only the small strip of speaker grilles and a lone LED light giving its presence away.  Features include 80db maximum output, built-in AM/FM radio, 30-hour battery life, and concurrent pairing with a single music source.  No speakerphone functionality, though.  No word yet on when it ships, but production should be under way soon — it got quadruple its funding targets on Kickstarter.  [HiddenRadio] 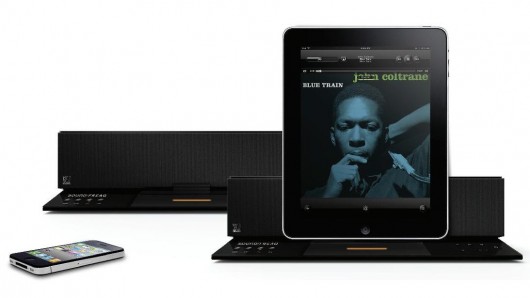 The Sound Step isn’t the most portable mobile speaker around — it’s noticeably bigger than those tiny sound bars that are so in fashion and its battery only lasts 6 hours.  With a 30-pin dock, USB charging and a composite out, in fact, it’s more for bedrooms and occasional taking out, rather than a go-to mobile solution.   Still, Soundfreaq’s line of downright impressive audio accessories should make this newer release a desirable choice for those who want the best audio on the go.  Packing a pair of 2-inch drivers and a dedicated 3-inch subwoofer, your tunes are likely to sound better here than with many of the speakers in our list.  Just make sure to have a bag where you can drop this thing in.  [Amazon] 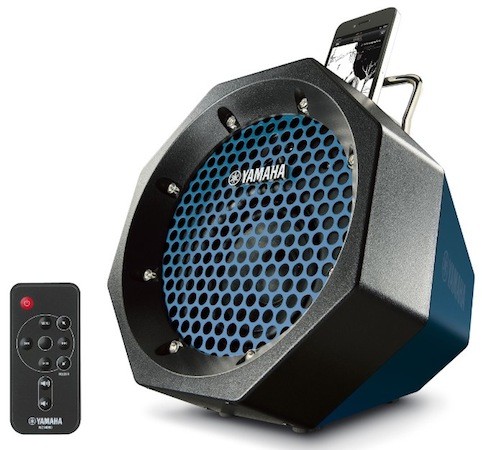 Sometimes, you want a portable speaker that you can use while slaughtering zombies in the jungle, demolishing old buildings in the projects, and digging for alien artifacts in the desert.  The PDX-11, with its perforated steel grill, chrome bar handle and all-around tough shell, should prove a fitting choice for that.  The octagonal-shaped audio gadget features a 4-inch woofer, a separate tweeter, an iPod dock on top, a 3.5mm slot in the back and a bundled remote (so you can change the music while driving a bulldozer or something).  All that for a hundred bucks, too.  [Amazon]