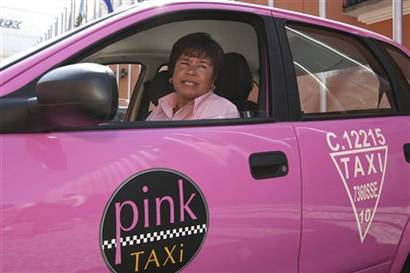 Mexico just unveiled a new fleet of taxis that’s sure to catch everyone’s attention.  Called the Pink Taxi, each cab comes in a painfully bright shade of the effeminate color.  Whatever that girl’s name is from Legally Blonde will approve.

More than looking like passenger utility vehicles out of Barbie’s universe, the cabs are a response to increasing complaints from female commuters regarding inappropriate behavior from male drivers.  To foster a safer environment, each Pink Taxi, which serves female passengers exclusively, will be piloted by a female cabbie.

The women-only cabs are operated by privately-financed Pink Taxi de Puebla, who have unleashed 35 of the Chevy compacts on the Mexican streets of Puebla as part of its experimental run.  Each vehicle comes with an onboard GPS system (wait…girls can read maps?), an alarm button (for emergencies) and a beauty kit (so you can touch up during the ride).

Women’s rights activists aren’t too happy about the presentation, though, claiming it doesn’t address the root of harassment problems.  Well, it really doesn’t, but it should help keep some of those incidents at bay.

According to the company operating the fleet, the Pink Taxi program will likely expand to other cities in Mexico if the local run proves successful.