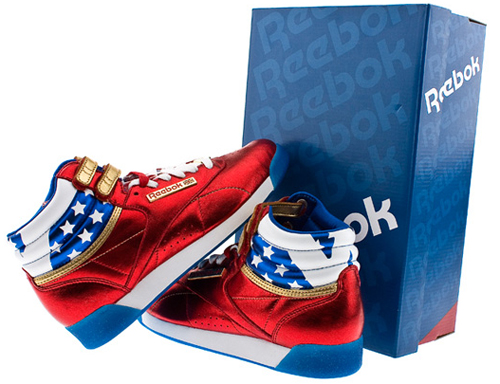 Linda Carter fans of yesteryear, who are probably in their forties now, are terrible targets for a funky-looking pair of colorful hi-tops.  Still, how can anyone resist raving over this pair of Wonder Woman Reeboks (official model name is Reebok Freestyle Hi Femme Fatale)?

Diana Prince (aka Wonder Woman) gets her entire crime-fighting outfit draped across this special edition Reebok Freestyle, which comes clad in a shiny metallic finish.  Sporting a blue star-spangled heel tab (with the trademark W logo for good measure), red upper and metallic gold accents, the new kicks misses no beat in the superheroine’s trademark colors.

While the last thing any guy would want is to put on Wonder Woman clothing, you can probably be forgiven for this one since it looks so hot.  If you’re still uncomfortable, you can always just buy a pair, stash it at home and wear it in private.  Just don’t forget to put on gold-plated bracelets and a tiara while you’re at it.

Does this mean a new Wonder Woman flick is actually coming (forgive us, we’re way behind on the Hollywood rumors)?  Maybe not, since the thing looks like a way to get girls into wearing hi-tops, more than anything else.

So how about it?  Ready to bring out your inner Wonder Woman?  The Reebok Freestyle Hi Femme Fatale sneakers is available from Schu for £64.99 (about $105).  To those hoping this came with something invisible (like a see-thru lasso or a plane), well, you can make that up for yourself since no one can see it anyway.