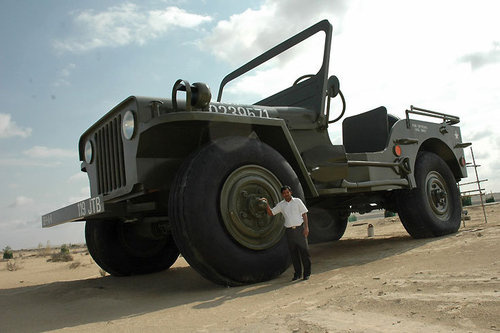 That picture above is not an optical trick. Instead, it’s the real, actual world’s largest Jeep and that small man is actually a normal-sized Sheikh.

Owned by Sheikh Hamad bin Hamdan Al Nahyan, the supersized Willy’s replica towers 21-feet tall and is, in fact, a 400% scale of the actual wartime classic it is based from. Why would someone want a vehicle that big? You wouldn’t be asking that question if you knew that Hamad is also known as the Rainbow Sheikh, a nickname he earned because he once bought seven brand new Mercedes 500 SELs and gave each one a different paint job (one car corresponds to each color of the rainbow) so he can use a different-colored car for every day of the week.

While good sense will tell you that the giant Jeep is probably a statue, you couldn’t be more wrong. Yes, the 4.4 ton behemoth is drivable and you don’t need to genetically engineer a giant human for it. Instead, the driver can actually sit behind the seven-slat front grille, where the actual control cabin is located. No word on how fast it can go, but it doesn’t really matter – if I see this thing trudging through the road, I’m pulling over. 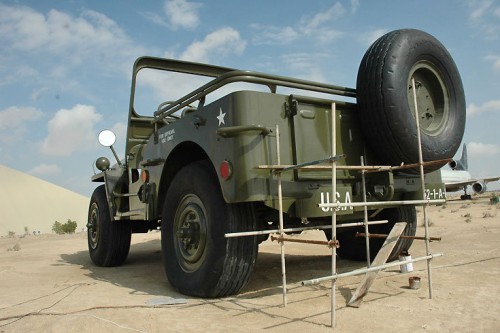 The Jeep is designed to haul the Sheikh’s equally ridiculous motor home, which is built into the body of a 1:1,000,000th scale world globe. Oh yeah, if that’s not ludicrous enough, the same guy also happens to own the world’s largest truck (an 800% scale replica of the Dodge Power Wagon), operates a car museum inside a pyramid (Emirates Auto Museum) and owns a Guinness World Record as the only man to pilot a jet pack over the Persian Gulf on a one way solo flight (that last one is according to Wikipedia, so don’t blame me if it’s some random dude making stuff up).