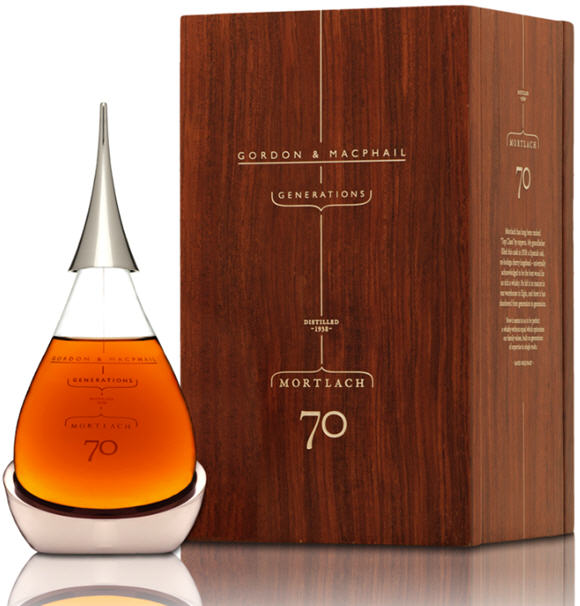 Some liquors are aged. Others are just freaking ancient. The Mortlach 70 Year Old is the new granddaddy for your whiskey collection, having stewed patiently a full seven decades.

Aged in a special cherry cask that lived to see the world before World War II in the Speyside region of Scotland, it’s as old as it is special. Only a limited number of bottles have been made, none of which I’ll have the heart to ever open even if you begged me to. I’d probably sooner put it on altar and offer it flowers each day. Why? Because I’m not worthy and I don’t deserve you, oh, immaculately matured fermented mash.

The Mortlach 70 Year Old is a single malt whiskey with 46.10% alcohol, housed in a teardrop-shaped bottle with a wooden case. First distilled in 1938, it’s officially the oldest whiskey in the world. We’re not sure how much bottlers Gordon and MacPhail put in each, but it doesn’t matter – this is definitely not the kind of drink you open while surfing late night TV eating popcorn.

According to the tasting notes, the spirit has the “colour of sun-bleached polished mahogany,” a “waxy and fruity” scent, a “sweetish start” with “sooty smoke finish” taste. They say the gustatory sensation is uncommon in liquor today, but should be more familiar to those who knew their whiskeys before the 1960s.

Designed for serious collectors and connoisseurs, only 54 full-sized bottles and 162 smaller bottles of the Mortlach 70 Year Old have been made. Prices are listed at £9,999 and £2,499, respectively.

[Gordon and MacPhail via Master of Malt]