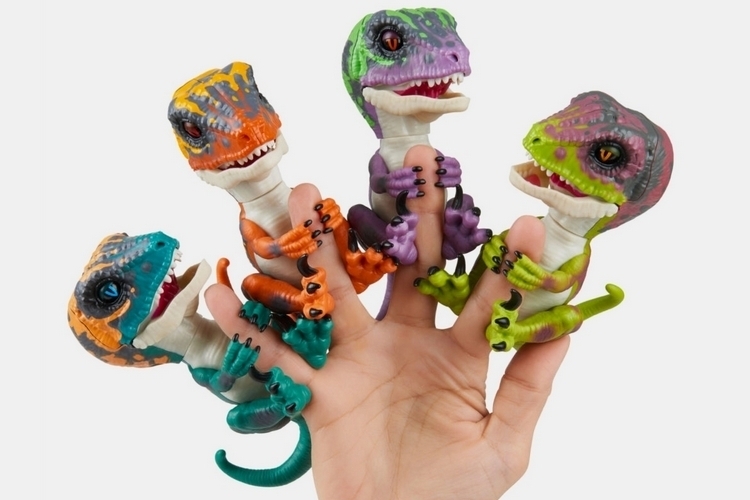 WowWee’s Fingerlings were a bona fide hit last holiday season, being one of the most sought-after toys that many tried (some successfully, others not quite) to get their hands on. As expected with any hit toy, the lineup of adorable finger-sized pets is growing ever bigger this year. Instead of more cute pets, however, Untamed by Fingerlings is throwing in baby dinosaurs to the mix, giving the erstwhile cute and adorable toy a fierce and ferocious twist.

Just like the previous pets in the Fingerlings family, the baby dinos are designed to wrap around your finger and interact with people in a lively manner. Unlike them, these things aren’t meant to just be sweet, cute, and friendly; instead, they’re designed to be wild creatures that you’ll have to tame, lest they respond to you in a hostile manner. Seriously, they will wake up in the middle of the night and gnaw at your toes and stuff. Just kidding, but you never know with these smart robots these days.

WowWee’s Untamed by Fingerlings is debuting the spinoff line with a set of four Untamed Raptors, each of which has its own unique name and personality.  We’re not entirely sure about what kind of personality each one has, but we’re guessing it has something to do with how each is named, so surmise what you can out of Stealth, Blaze, Razor, and Fury. Yes, those names do sound terrifying, so this just might be the perfect upgrade for kids who find the current Fingerlings lineup of monkeys, unicorns, and sloths a little too saccharine to their liking.

Like other toys in the lineup, the raptors respond to touch, motion, and sound, reacting based completely on your input. That means, it will provide an appropriate response based on whether you pet it gently, yell at it callously, or touch it aggressively. According to the press release, they’ll either respond in a way that’s angry, calm, tamed, or untamed, which hints that this is a far less friendly pet than the previous Fingerlings you’ve probably played with.

Each Untamed Raptor comes with 40 sound effects and animations, which it uses to interact with whoever’s playing with it at the moment. Unlike previous toys that relied on the eyes to animate its expressions, this one comes with a snapping jaw and claws that grip with a little more pressure, which allows it to respond to any of your actions in a more aggressive manner. And, yes, we’re guessing much of the sound effects will involve scary grunts, angry growls, and whatever other sounds those dinosaurs made in all of the Jurassic movies over the years.

Speaking of Jurassic, the release of the baby dinos sure sounds perfectly-timed, since a new installment of Jurassic World is coming later this year. It’s not tied-in with the movie, by the way, although we have a feeling the release of the film will spur a whole lot of sales for this thing, along with many other dinosaur toys, anyway.

Slated to come out in May, the Untamed by Fingerlings Untamed Raptors are priced at $14.99 each.