WWII Patrol Torpedo Boat Is Only One Million Dollars 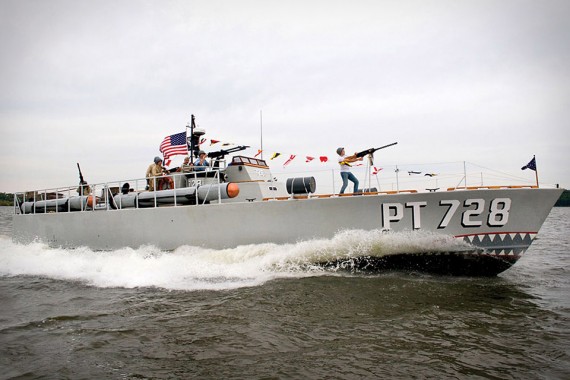 When you’re rich and have all the luxury cars you could fit on your mansion’s garage, you start buying other expensive things.  Like jets  Or Mercedes Benz helicopters. Or, if you’re only somewhat filthy rich, boats.   If you’re also a war nerd, this World War II Patrol Torpedo Boat is the watercraft you need to reel in with all those stacks of money you’ve been hiding under the bed.

A genuine article out of the second World War, the vessel is only one of twelve remaining in the world.  Don’t worry, it’s not rotting, crickety and destined to shrink the moment you ride it out to sea.  Instead, the 66.5 year old battle watercraft has been restored to full operational mode, complete with a license from the US Coast Guard to carry passengers.

This PT-728 Patrol Torpedo Boat was originally built in the Annapolis Yacht Yard using a 72-inch British Vosper design.  The triple-ply mahogany hull has been restored to pristine condition, allowing it to plane over water at up to 42 knots, just like it used to back when it  went to work shooting torpedoes at enemy ships.   Since it’s 2012, the thing has been updated with modern day hardware — a pair of turbocharged diesel engines pumping 1,100 total horses, onboard electronics and powerful radars.

And just in case you’ve been thinking of using it to reenact bayside battles, it comes with the old firepower.  While deactivated, you’re going to have a hoot pretend-killing enemies with the three .50-caliber Browning machine gun stations,  the 20mm Oerlikon cannon, a pair of depth charge launchers and four tubes for housing Mark VIII torpedoes.  Yep, it’s all that.

Hammacher Schlemmer has this restored  PT-728 Patrol Torpedo Boat available from their website.  Price is a cool million dollars.