Xbox One: Microsoft’s Next-Gen Gaming Console Is Here – Everything You Need To Know

After what felt like an eternity with the Xbox 360 (it’s been out for the last eight years, to be exact), Microsoft has finally unveiled the device’s next-gen successor.  Called the Xbox One, the new home console goes beyond gaming, positioning itself as the quintessential sidekick for the large-screen HDTV in your living room.

Home Entertainment: While Sony’s reveal of the PS4 centered on the console’s gaming features and graphics prowess, Microsoft kept its focus on the way the Xbox One will integrate with the entertainment experience in your living room.  We’re pretty sure the PS4 will get some of the same entertainment features, of course, but the Redmond guys definitely treated it as the centerpiece of the reveal.  It’s a smart approach, considering the gaming console is the one piece of gadget with the real potential to consolidate a whole load of hardware that you’ll otherwise equip a home theater with individually. 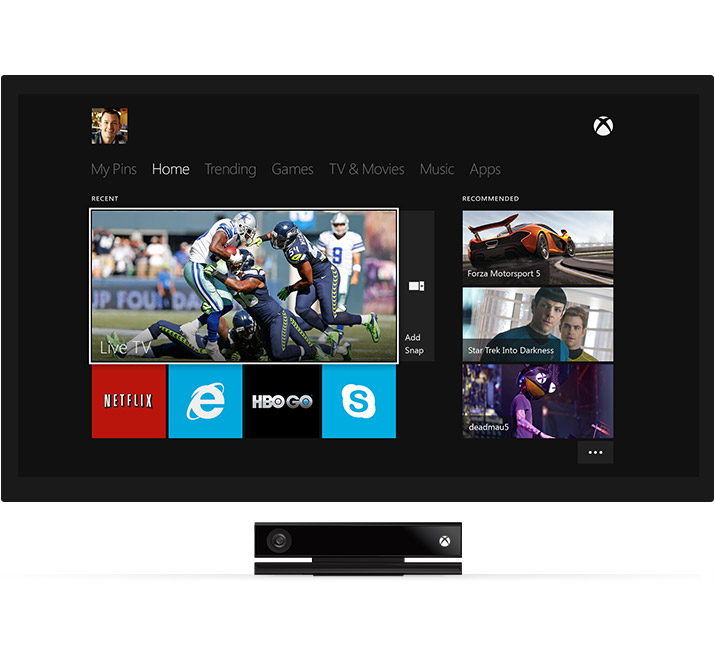 Billed as the “ultimate all-in-one home entertainment system,” it bundles gaming, TV (i.e. you can connect your cable box straight to the Xbox One), movies, music, web, and apps, allowing you to do, practically, everything entertainment-related (and maybe a little work, too) while staring at the TV and sitting on the couch.  No word on whether it can perform as a DVR for recording shows, but it should — otherwise, there’s no way my cable box is hooking up to it permanently.  And that’s just the start, with tons of apps and cloud services likely making their way to the platform post-launch, it’s only bound to get better with time.

You’re not stuck with just doing one thing at a time, of course.  Want to play music while slaughtering combatants in Halo?  Yep, that’s easy enough.  How about watching a Netflix movie while surfing the web on the same TV?  Not a problem with a feature called Snap, which lets you split the TV screen so you can enjoy two things at the same time. Basically,your ADD tendencies will be fully embraced.

Design: Microsoft decided to dress up the Xbox One in a relatively uninspiring box — similar to VCRs from 20 years ago, non-tower desktop computer cases, and, well, the original Xbox.  While it’s not the prettiest sight, it actually makes sense for a gadget that’s meant to sit permanently in a media cabinet, since all that futuristic styling for the sake of style is better employed in something you’ll take out frequently.  This, on the other hand, will likely be stacked in a shelf on your entertainment center, with everyone’s attention focused on the TV the entire time.

Hardware and Software: Remember the time when processing power was all we fussed about with every new console release?  While that’s no longer the case now, it still carries some amount of importance and the Xbox One obliges, with an 8-core x86 processor, a 500MHz GPU, 8GB of RAM, and a 500GB non-removable hard drive.  If the storage sounds a little paltry, don’t worry — it supports external hard drives via a USB 3.0 slot, so you can extend your local storage infinitely.   It features a Blu-Ray drive, WiFi, Ethernet, HDMI and infrared (for the wireless controller connection).  Microsoft claims the console’s “revolutionary architecture… is like having a supercomputer in your living room.”  We’re not exactly sure what that means, but we reckon the above specs can perform up to par for whatever a next-gen gaming computer requires.  Running on top of all that hardware are three operating systems in one — the Xbox OS, a Windows OS kernel (likely there for all the apps and browsing features), and a software that connects the two for multitasking purposes.

The Kinect, now armed with a 1080p camera and a multi-microphone array, has also been reengineered to be more precise, responsive and intuitive, as it captures movements and sounds in the periphery.  New features include an expanded field of view, an active IR camera (allowing the camera to work in complete darkness), advanced 3D geometry (for better capturing your postures and movements), more sensitive motion technology (it can detect movements as small as a hand squeeze or the twist of your wrist), and advanced noise isolation (for precisely figuring out commands even in crowded environments).  Heck, it can supposedly even read your heartbeat while watching you exercise, so it’s pretty amazing.

The controller is laid out much the same way, but have been streamlined for improved precision and comfort.  Microsoft claims they put in over 40 technology innovations into the controller, including new impulse triggers for precise fingertip feedback, easier access to buttons, a more responsive D-pad, and more ergonomic grips, among others.

Controls Beyond Buttons: Just when you thought voice control on your smartphone was awesome enough, Microsoft pulls a fast one and integrates the feature into their third-generation Xbox.   That’s right, you can simply walk into the living room and shout “Xbox on” to get the thing to start up — no more bending over to press the power button.  It doesn’t end there, of course, with voice controls supported throughout the entirety of the experience, whether you want to watch TV, surf the web, run apps, listen to music, play a different game, and everything in between.

Prefer to save your voice for the singing videos you post on YouTube?  Not a problem, since the Xbox One also supports movements and gestures (via the new Kinect camera), allowing you to use your hands (and, maybe, other parts of your body) to navigate the UI. Details are scarce on this end, but it’s definitely something people are looking forward to.

Hate having to log in to your Xbox Live account?  No longer necessary.  The new system will use voice and facial recognition to immediately identify who’s that dude parked on the couch, automatically logging on to your account and showing a custom homescreen based on your historical habits.  Most likely, that means you’ll see homescreen icons for recent games you’ve played, recent shows you’ve recorded, websites you’ve visited, apps you’ve launched and so on, which makes for a very useful interface.

Gaming: Granted, the focus on “home entertainment” instead of “gaming” is likely going to turn off a lot of folks who just want to mash some buttons.   But we doubt the Xbox One is going to slack on that end, with powerful hardware and a robust platform up its sleeve.   While the games shown off so far appear to pale ever-so-slightly in comparison (in terms of graphics, at least) with the PS4’s demos, Microsoft is saving the most exciting reveals on this end for their E3 appearance in June, so it’s probably best to wait till then to pass any judgment.  So far, though, Microsoft has been showing off titles such as Forza 5, Quantum Break, and Call of Duty: Ghosts.

From what we understand, games are no longer played by being popped into the optical drive every single time.  Instead, you’re supposed to insert a disc once, have it install on the hard drive, and play from there (PC style).  That way, no need to fiddle with optical media the next time — just choose your game from the UI and pick up right where you left off.  Updates are designed to automatically install in the background, too.

Xbox Live, of course, will remain an integral part of the gaming experience, bringing a social aspect to the proceeedings.  One of the more notable additions is a feature called Living Game which, essentially, allows game worlds to keep going even after you log off (basically, AI takes over), so things can turn out very different the next time you pop in to play.  Game DVR is also a built-in experience (rather than a per-game feature),  allowing you to replay in-game clips for reliving your glorious victories and sharing with your friends.  If there was any doubt that the cloud will be even more prominent on the new console, there’s this factoid: Xbox Live’s current roster of 15,000 servers will be expanded to 300,000 within the year.

One new function that’s likely to cause some issues is each Xbox Live account being attached to a particular video game copy.  That means, the Blu-Ray copy of the Forza 5 you installed will be recorded as playable only by your Xbox Live account.  We’re not sure yet what this means for those three teenage brothers with different Xbox Live accounts who play on the same console at home using the same disc and we’re not sure either what this means when you want to sell a game that you finished over a weekend because the replay value sucks, so this could prove a tricky line that needs to be sorted out.

Xbox Smartglass: The Wii U’s touchscreen controller is fun, but why not just equip your smartphone to play that role?  That’s kind of what they did with the Xbox One’s Smartglass feature, which can use a smartphone or tablet as a secondary display that integrates with the console.  While this will, more than likely, be a native feature for Windows Phone and Windows 8 devices, we’re more interested on how this will be implemented with iPhones and Androids because, let’s be honest, those are what we’re all using anyway.  Unlike the existing Smartglass, the Xbox One version is built from the ground up, so it’s easier for developers to integrate into their games and applications, likely making the feature more widespread.

Apps: As we anticipated with next-gen consoles, apps will likely be a big part of the equation.  While details for those should trickle as the Xbox One nears launch, Microsoft showed off a few, such as Skype, IMDB and an exclusive NFL portal of sorts that should make the Xbox One a one-stop-shop for football fans, whether they’re managing fantasy teams or keeping up on game scores.

Always-On: One of the biggest rumors about the new Xbox is the requirement of an always-on internet connection.  Luckily enough, that isn’t true.  But there’s, alas, a caveat: many of the console’s functions are so tied to the cloud that you’ll probably need an always-on internet connection anyway, if you’re going to enjoy its breadth of features.  Plus, even single player games will occasionally check the cloud to verify your license, so, yeah, we guess internet is a necessity.

Backwards Compatibility: Sadly, this one’s a “no.”  The third-gen Xbox won’t include support for its predecessor’s games, so you’ll have to keep your Xbox 360 if you want to continue playing your favorite titles from the past couple of years.

Overall: Personally, we think Microsoft hit the mark (maybe other than the confusing name).  While the Xbox One feels like a safe upgrade, a radical change probably isn’t necessary, considering most people’s positive feelings about the current-gen Xbox 360.  By playing it safe (essentially just upgrading the hardware and bringing more entertainment features), Microsoft almost guarantees themselves a successful product, provided issues don’t arise out of its anti-piracy measures and all-in-one entertainment aspirations.

According to Microsoft reps, the Xbox One will be available “later this year.”  We’re almost certain that means the console should come right in time for the holidays and we, honestly, can’t wait.