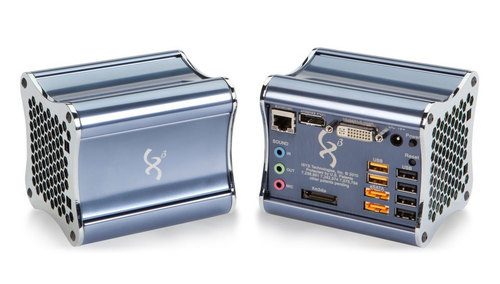 When a salesman tries to lure you with a perpetually upgradeable computer, the smart thing to do is run.  That’s not saying the Xi3 Modular Computer isn’t a darling piece of hardware, though.  It’s just that being billed as “the last computer you ever need to buy” is a bit too much, given our familiarity with gadget obsolescence.

Once you get over the hyperbole, it’s actually a pretty awesome machine, being a full desktop computer on a case that measures a mere 4 x 4 x 4 inches.  So awesome, in fact, that it’s gotten the nod as a CES 2011 Innovation Award winner for the Computer Hardware category.

The Xi3 Modular Computer manages the small size by ditching the single motherboard design.  Instead, they split into three parts — one board with two AMD Athlon 64 X2 processors, DDR2 RAM (up to 4GB) and integrated graphics; and two I/O boards that handle connectivity and input/output requirements.   The I/O boards don’t scrimp on the ports, either, with USB, HDMI, DVI, VGA, eSATA, audio I/O, ethernet, a proprietary Xi3 port and even an external PCIe (presumably, so you can throw in a beefy graphics card).  It also requires just 20 watts or less of power to operate.

Overall, this sounds like a superbly-designed computer, offering the same upgradeable convenience of a regular desktop machine in a diminutive frame.  When AMD’s moved on to a new socket, for instance, and you want to plug in a freshly-bought CPU, just buy a new processor board, while retaining the rest of the ensemble.  While I do maintain my reservations for it being upgradeable forever, it could definitely last longer than your typical compact microATX-based home rig.

General release for the Xi3 Modular Computer is slated for 2011.  It’s available in limited quantities now, though, priced at $849.