Gaming for hours on end does take its toll.  Your eyes hurt.  Your hands ache.  Life passes you by.  XtendPlay offers a solution for the second woe.  Yes, life will still pass you by but your hands should be fairly usable the whole time.

Created by Xwerx, the accessory came about as a way to combat those cramped, sweaty and sore hands that usually accompanies marathon COD sessions  on a console.  Sure, they look dorky, but if you’re regularly playing  in your bedroom for 12 hours straight with no girls for miles,  we doubt that should be an issue. 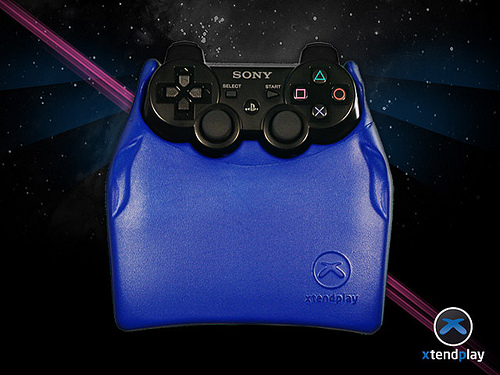 But how does XtendPlay make the finger joint pains that normally come with button mashing go away?  According to the company, the soft-touch foam shape encourages fingers and hands to rest in a more natural position during gameplay — one that is relaxed and unstressed.  Airflow channels are located strategically around the body, too, keeping your palms from sweating heavily as they normally would.  Because of the ergonomic playing position it encourages, it will not only spare your hands and fingers from pain, but your arms and shoulders, too.

Early reviews of the accessory sound surprisingly positive.  From the sound of it, the unique solution does exactly as advertised.  Now, if only someone can come up with maintaining a decent life even with console gaming addiction dominating your waking hours…

Available for both standard Xbox 360 and Dualshock 3 controllers, XtendPlay comes in just one color for each of the consoles (green and blue, respectively).  It’s available now, priced at $19.99.