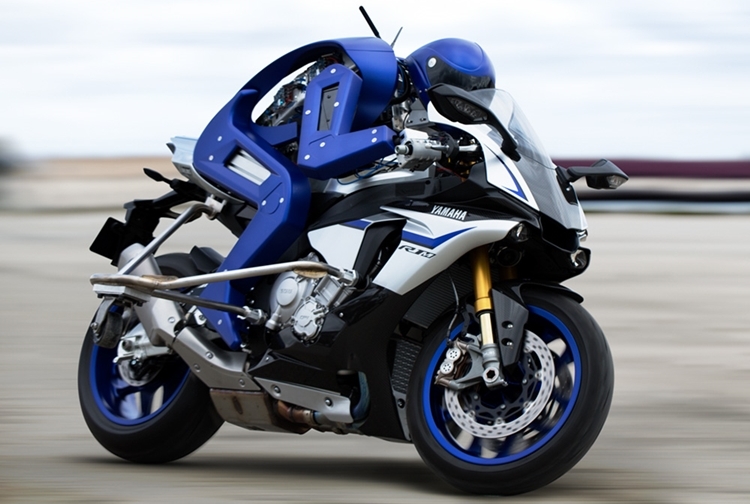 We imagine racing against the Yamaha Motobot will be all sorts of scary. Not just because it’s a robot that can competently handle a liter motorcycle, but more because it’s a bundle of steel and wires that can feel no fear.   I mean, I’m afraid of getting into a fatal crash. This robot? Probably not.

Unveiled at the Tokyo Motor Show, it’s a motorcycle-riding humanoid bot that’s rigged to operate and handle a full-fledged, unmodified superbike. As in, it twists the throttle, squeezes on the brakes, and controls the steering all on its own, all while going round and round on the track.

Built around a fusion of Yamaha’s motorcycle and robotics technologies, the Motobot is still in the R&D stages, so it’s not quite the racing automaton the company is hoping to turn it into. In fact, this initial version can only ride slowly and even uses training wheels to avoid tipping over when making a turn. Still, it’s quite an achievement and an impressive first step. Plus, it totally looks like the way I always imagined what our future robot police force is going to appear like.

According to Yamaha, the goal is to eventually fashion the robot into one that’s capable of piloting a two-wheeled 1,000cc machine to speeds of up to 120 mph on a race track. Not that they’re hoping to build a robot GP league or anything, though. Instead, they want to employ it as a testbed for developing safety and rider support systems, as well as use any insight the robot provides to pioneer new lines of businesses.

Check out the video below to see it in action.