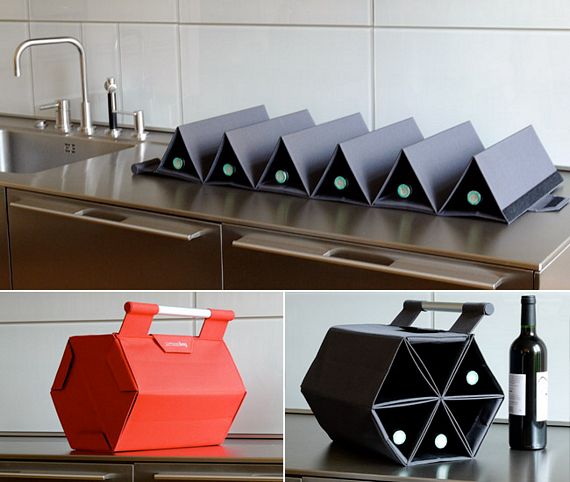 Even slobs like us grow up at some point.  And when that happens, we stop hanging out with the crowd that texts you to bring a six-pack and some pot to a party, choosing to chill with classier folks who call you up to bring six bottles of fine vino and cheese instead. And the Zebag is exactly what you’ll need to transport all that wine.

Designed in France, the bag lets you haul up to half a dozen bottles safely and conveniently.  No more trying to cram the loot into a backpack or a tote — you just carry the wine as nonchalantly as you would a six pack of Heineken back in your wilder days.  Which, we’re guessing, was last week.

The Zebag is a hexagon-shaped wine carrier that comes in two types: a smaller one that holds three bottles and a bigger tote that holds six.  It’s opened from one of the hexagon sides, with a removable flap that you can easily attach or detach whenever necessary.  Construction is durable impregnated fabric.

The design, which sits the bottles horizontally with the head pointing out, also makes for a great way to shelve the wines on a table when you do get to the party, whether set down in its original hex shape or laid out flat like six tents in a row.  The entire case can also be hung vertically when unfolded.

Four colors of the Zebag Wine Carrier are available: black, gray, red and khaki.  Price is €35 for the three-bottle model and  €49.99 for the six-bottle version.