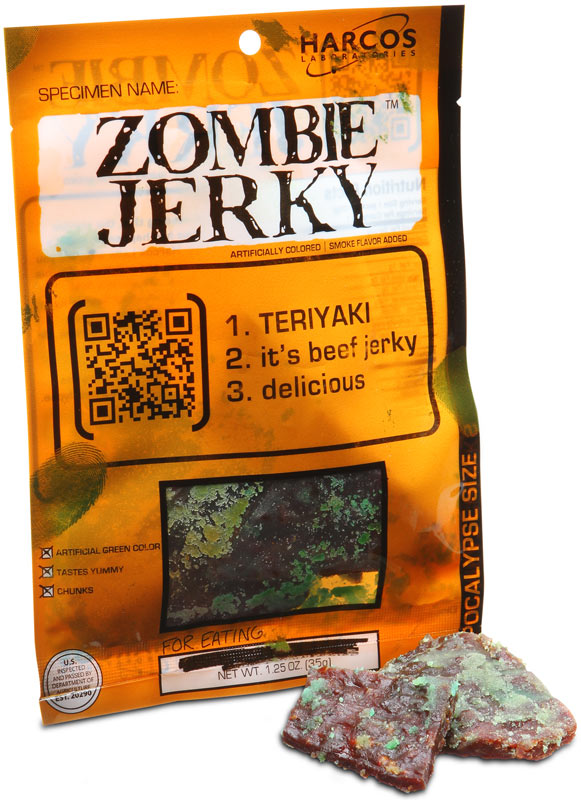 Blowing zombie heads will likely be the number one recreational activity of the zombie apocalypse.  But that creates another problem: What will you do with all those lifeless bodies your rampaging band of zombie-killers leave behind?  Here’s one enterprising idea for future consideration: Zombie Jerky.

Sufficiently cleaned and de-wormed, those rotting zombie corpses could actually be put to good use as sustenance for mankind’s remaining survivors.  Sure, we doubt it will the best meal of your life.  In a post-apocalyptic world where resources are scarce, however, we doubt you can be too picky.

Since zombies aren’t real yet, the Zombie Jerky isn’t really made from actual zombified human meat. Instead, it’s a regular 1.25-oz teriyaki beef jerky, lathered with edible green goo to resemble the decaying flesh of our favorite fictional living deads.

Each serving of the sun-dried cow strips comes in a specimen package that makes it look more like a lab sample than a protein-filled snack.  No word on whether it’s able to recreate the taste of human flesh, but with that molding, sickly appearance, we’re guessing this makes good practice for when the zombie virus actually hits suspect zero and the epidemic begins.

Thinkgeek has the Zombie Jerky in stock, priced at $4.99 each.