Zombie Shadow Cast Puts The Living Dead In Your Room 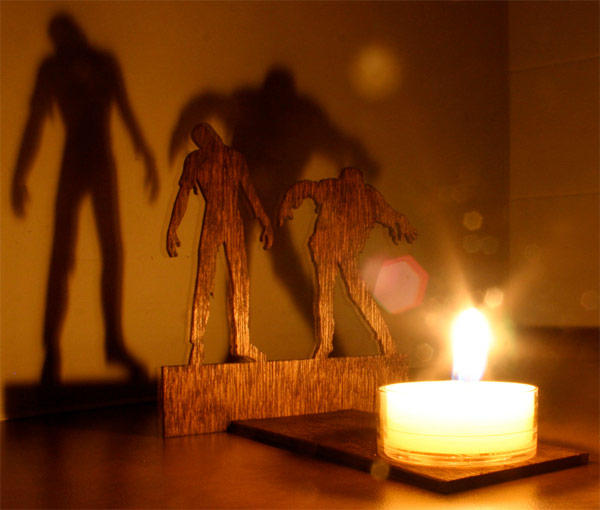 Ever took a candle-lit bath and muttered to yourself, “Man, I wish there were zombies here in the room with me?”  If you have, then you might want to consider talking to a psychiatric counselor.  Before you do, however, best get yourself a Zombie Shadow Cast and make that wish come true.

Now, it won’t really put brain-eating living deads in the same room with you.  That’s just silly.  The creators can get sued, after all, when your family comes home and finds you torn from limb to limb with your head sliced open.  Nobody wants that kind of trouble.

Instead, it’s just a small candle holder designed to cast shadows when you light up the wick.  In this case, the shadows will be of two zombie figures in suspended animation that look way, way creepy.

The Zombie Shadow Cast is made from 1/8-inch thick mahogany ply, with laser-cut figures of two outlines who look like staple extras in gory zombie flicks.  Wood is stained and varnished for a nice appearance.  It comes with one votive candle so you can use it immediately while you watch a late night horror movie with the lights down low.  Eek.

Obviously, the practical joke potential for this thing is off the charts.  Wait till your wife is asleep before you light it, then wake her up at 2AM in the morning and watch the ensuing scare.  Make sure you keep some blankets in the living room, too, because that’s probably where you’re sleeping after that.

You can get the Zombie Shadow Cast for $15.