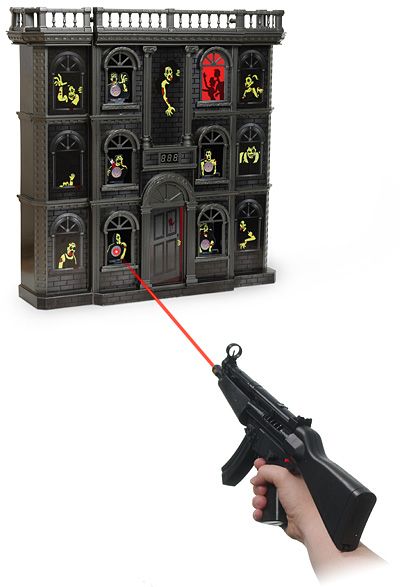 Video games are evil.  Learn a real skill instead.  So quit that Left 4 Dead game for a minute and turn your attention to the Zombie Shooting Gallery, a tabletop shooting arena that lets you take out a never-ending supply of brain-eating villains.

We love video games just as much as the next guy, but we all have been spending an extended amount of time staring into rectangular boxes nowadays, aren’t we?  At the least, the game lets you play a quick round of blasting through zombies without having to stare into another LCD screen.  Plus, you get to hold a real gun and shoot at actual targets without mashing any buttons. 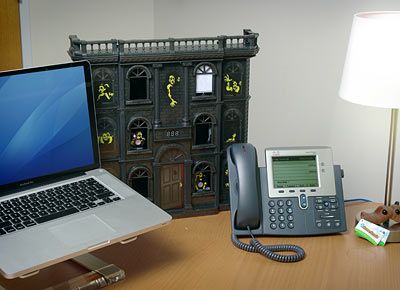 The Zombie Shooting Gallery consists of a mechanical building facade (17 x 8 inches), where zombies pop out of windows, and a laser assault rifle.  Shoot each zombie as they come into view, lest they feast on another human hostage’s brain.  The more you kill, the faster they get, so better build up those shooting skills, lest lose the rest of humankind.  An integrated LED display clues you in on your kills, so you can keep count of just how many zombies you’ve put out of their misery.

Of course, you can always just step out of the house for a game of ball or do some wheelies on a bike if you really need a break.  However, none of that prepares you for the impending zombie invasion (which we all know is imminent), so strap up and get ready for war.

Need to work your trigger finger?  You can grab the Zombie Shooting Gallery from ThinkGeek for $35.  It requires 9 AA batteries, though, so best get that battery charger ready.