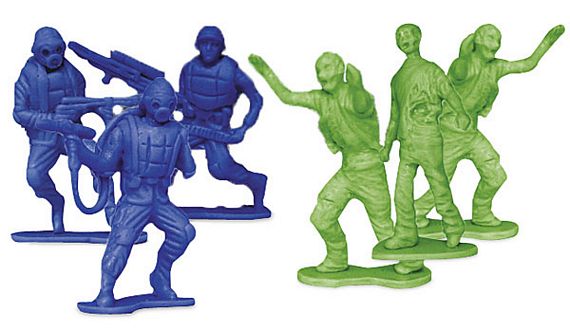 The T-virus may or may not drop.  The zombie apocalypse may or may never happen.   Regardless, we’re all in anticipation of it and if we don’t get it in real life, we’ll just build zombie-infested models of our favorite places.  To make your model, though, you’re going to need a lot of zombies and zombie-hunting soldiers decked in specialty gear.  That’s what this Zombies Vs. Zombie Hunters army men figures are for.

When the zombie apocalypse descends, it’s highly unlikely we’ll have soldiers fighting hordes of the infected in regular military gear.  After all, they’re fighting a different type of enemy, requiring them to wear protection against bites and potential infection with airborne viruses.  That’s why this set with modern apocalypse-era soldiers make so much more sense compared to pitting your walkers against classic army men.

The Zombies Vs. Zombie Hunters army men come in two sets: lime green zombies and navy blue soldiers.   Like classic army men, they can stand on their own base, making them easy to set up across any apocalypse-era terrain.    Each set comes with a grab bag full of the figures, so you can quickly populate any landscape with both flesh eaters and the men who fight them with just a couple of sets.

Granted, these look like cheap army men rather than the quality models the Walking Dead Army Men are.  If you’re going for quantity over quality, though, this is definitely the set to pick up.   It’s available from Thinkgeek, priced at $9.99.