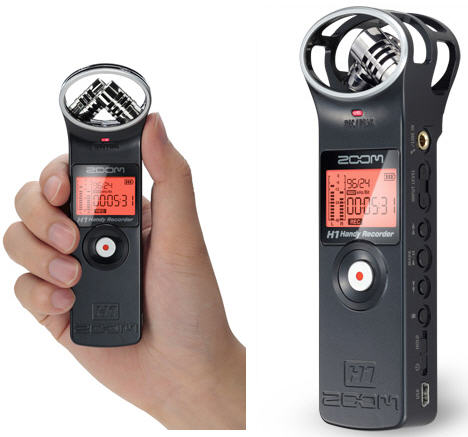 How good of a sound quality can you really get on a pocket recorder? If we’re to believe Zoom H1’s claims, it’s quite impressive. Boasting professional recoding technology and studio-quality microphones, it’s quite possibly the most powerful portable audio recorder today.

Clad in a frame no bigger than a generously-sized candy bar, the device can produce 24-bit/96 kHz broadcast WAV recordings, making for high-quality audio that should turn out useful in many applications. In fact, they’re promoting it as for use by amateur filmmakers, as an entry-level dual-source recorder if you don’t have an available alternative (such as when you’re shooting with a video-capable DSLR), or by musicians looking to record their practice sessions in crystal clear detail.

The Zoom H1 can also record onto MP3 from 48 to 320 kbps, in case you want to maximize the recordings you can store on your SD cards (it supports up to 32GB). Using an X/Y microphone configuration, it allows equivalent distance from the sound source for perfect sound localization without phase shifting. All functions are available via physical buttons and switches, such as the level, track marker, low cut filter and volume. Other details include an LCD display (which shows current recording settings), a built-in reference speaker, an integrated tripod mount, USB connectivity and 1/8-inch audio I/O.

Truth be told, it skimps on throwing extra features to cram all the hardware into such a small slab. However if it can take studio-quality recordings as claimed, I can’t imagine anyone complaining. It requires two AA batteries to operate, which should last it for a good ten hours worth of sound recordings.

Available starting July 30, the sweet-sounding Zoom H1 will come at an even sweeter price: just $99.