Water balloon fights are one of the most fun things about summer. But what if they could be even better?

The only thing that detracts from the fun of water balloons is the process of filling them. How many times have you been embroiled in an epic water balloon fight, ran over to the hose or the outdoor faucet, popped a water balloon on, and had it break? It’s inconvenient and takes you out of the action.

Zuru, a New Zealand based toy company, has come up with a solution—and make no mistake about it, it’s brilliant. It’s not every day that you hear the phrase “water balloon innovation,” but that’s the best way to describe what Zuru has managed to accomplish with their Bunch O Balloons invention.

This product is, as far as we know, the only way to fill over 100 water balloons in mere seconds. Yes, seconds, for a task that would probably take you a half an hour or longer if you were to try and do it the conventional way of filling each water balloon. Sounds pretty amazing, right? Let’s find out exactly how this awesome summer contraption works and how it can improve your outdoor fun almost instantly. 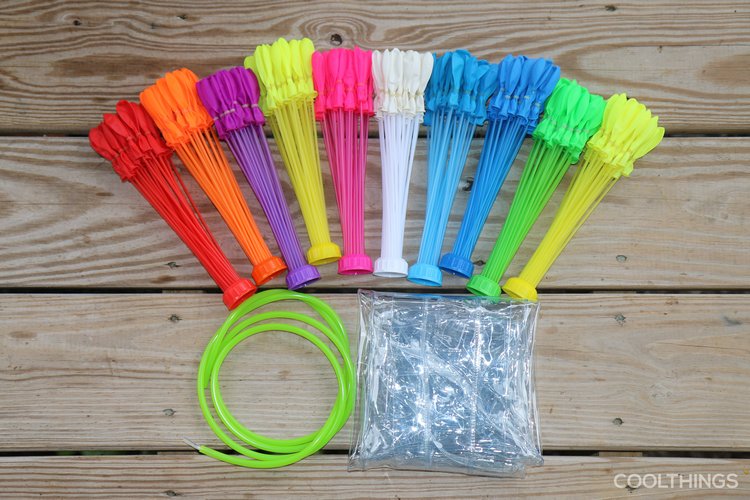 Sounds Great, But Does This Thing Really Work?

All right, so now that we’ve got you properly hyped, let’s take a look at how the Bunch O Balloons invention from Zuru works and why it works so well. Picture, if you will, a squid—except instead of tentacles the squid has water balloons for limbs. That’s more or less what the Bunch O Balloons looks like in their pre-filled state. Each balloon is outfitted with a self-tying mechanism and a tube. The tubes run up to a connector which has been constructed to fit onto most water sources, such as the spigot for a hose or your hose itself.

Once attached to a water source, you slowly crank up the water pressure. This fills each balloon at the end of the tubes. And since the tubes have been designed to provide consistent water flow into each balloon, you don’t get some balloons filled all the way while others are barely filled at all—they’ll each be filled the exact same amount. This gives you remarkable precision over how “tight” you want your water balloons to be. As any good water balloon aficionado knows, water balloons which are more full will burst easier, and ones with less water will take more force to pop.

So, what about the tying? Surely you must have to tie off each of these quickly-filled water balloons yourself, right? No—Zuru has thought of that too, and with the Bunch O Balloons set you don’t have to do any tying. Each water balloon has a self tying mechanism which activates as soon as you pull it off of the tube. Basically this means that once all of the water balloons are full, to get back into the action of your water balloon fight all you have to do is pull one off from its tube.

Speaking of popping, while it’s not completely necessary and the Bunch O Balloons set can be used without it, it’s recommended that you have some kind of container for when you’re filling the balloons. A plastic Tupperware storage box or similar of a size that’s a few feet wide and deep is ideal. This way, you can place this underneath your water source, hold the Bunch O Balloons set over it, and fill them. In the event that any slip off, they’ll be caught by the box rather than rolling around your back yard or popping prematurely.

Furthermore, you can also use the storage box as a convenient container for all of your filled water balloons. Once your batch of water balloons are all full, you can pop them off in a big bunch and they’ll all land in the box. Then, during your water balloon fight, you can simply return to the box whenever you need to “reload.” For extra fun, you can set up a water balloon container like this for each team—that way you won’t have to worry about arguing over who’s using more water balloons, because everyone will have an equal amount. 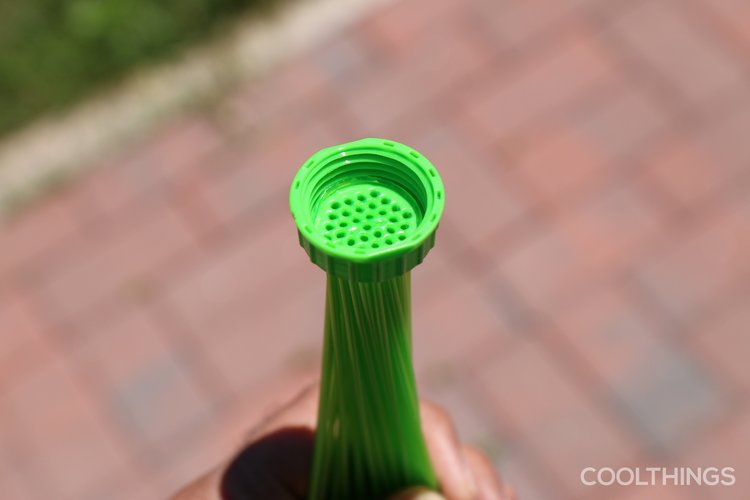 To prevent water balloon breakage even more, you can fill the container about halfway with water. This will allow the water balloons to float, and will reduce the weight they place on one another. If you add them to a container or the ground without water, it’ll still work fine—but why not take this extra precaution, considering you’ll be right next to a water source anyway? By doing so you’ll extend the life of your water balloons and prevent unwanted breakage.

It’s hard to find a fun summer occasion that Bunch O Balloons wouldn’t be perfect for. This brilliant invention makes any situation where water balloons are going to be used easier, more convenient, and way more fun.

For example, if you’re planning a kid’s birthday party and it happens to fall during the summer, you really can’t go wrong with this—it takes all of the headache out of filling a ton of water balloons for kids. Do you remember how anxious you’d be as a kid when you would sit and fill up three or four water balloons at a time and be feeling so eager to get back to playing with the other kids? They won’t have to experience that, and if your job as mom or dad has traditionally been to fill the water balloons for the kids, you’ll find that you’ll save a ton of time. It’s much more efficient to use Bunch O Balloons to fill up water balloons for your kids, and it means you’ll have more time to take pictures or play with them yourself rather than manning the water balloon filling station. 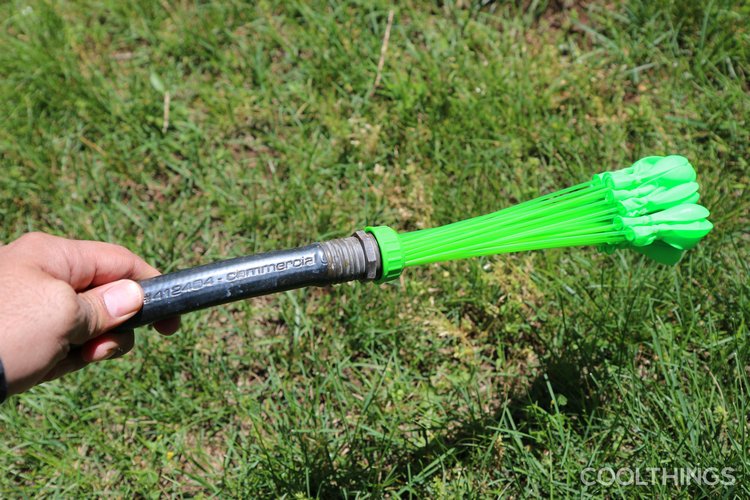 Bunch O Balloons aren’t just for kids though either—is there really any age where water balloons aren’t fun anymore? We’d like to think that there isn’t, so get a few batches of these for the next time you throw an adult pool party. The addition of water balloons is a whimsical, fun addition and thanks to Bunch O Balloons, you won’t have to go through the trouble of filling each water balloon by hand. If you follow our suggestion and use a container for each batch of water balloons, it’s a really fun idea to leave several of these containers outside for your pool party and just see what happens. You’re guaranteed to have one of the most fun and memorable adult pool parties around. 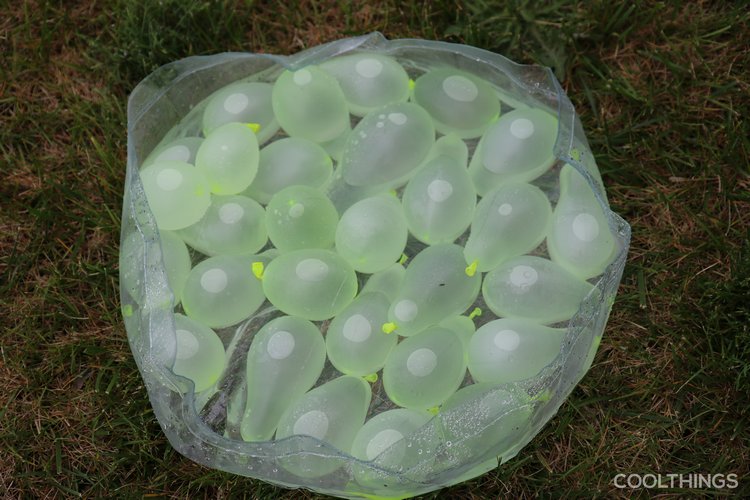 No matter the occasion, Zuru’s Bunch O Balloons makes the incredibly fun activity of throwing water balloons at one another a far more convenient and action-packed experience. You don’t want to enter summer without a few sets of these.

Overall, we think that toy manufacturer Zuru has managed to make a really great summertime toy/accessory with their Bunch O Balloons invention. It’s one of those creations where when you see it, you think something along the lines of, “Wow, that’s so simple—why hasn’t someone made this before? I wish I had it as a kid!”

While of course water balloons are volatile by nature—they’re intended to pop after all—the build quality of the Bunch O Balloons device is quite good. You aren’t likely to find that the spigot or water source attachment leaks very easily.

As we discussed before, using a container filled partially with water can make everything go much smoother, so we definitely recommend you do that.

As far as cleanup is concerned, other than the unavoidable task of picking up spent water balloon casings, the rest of your job will be very easy with the Bunch O Balloons invention. Since the attachment and filling tubes are disposable, you can just toss it in the trash once you’ve filled up all of the water balloons in each set.

Bunch O Balloons from Zuru is an excellent addition to any outdoor party this summer, whether it’s for kids or adults. It’s an easy, affordable product which works as described and can take the monotony out of filling water balloons. Buy several sets and you’ll have an unforgettable afternoon in the sun.

Zuru Bunch O Balloons Review - Just Add Water!
Easiest and Fastest way to fill a whole bunch of water balloons we have seen so far.
Lets you fill an incredibly large number of water balloons in a very short period of time. 100 in 60 seconds is not too off the mark.No need to tie off balloons yourself.Consistent filling of water balloons.
100 water balloons go a bit quicker than you might imagine.Did we mention you will go thru them like crazy fast.
92%Our Score
Convenience95%
Fun Factor95%
Cost85%