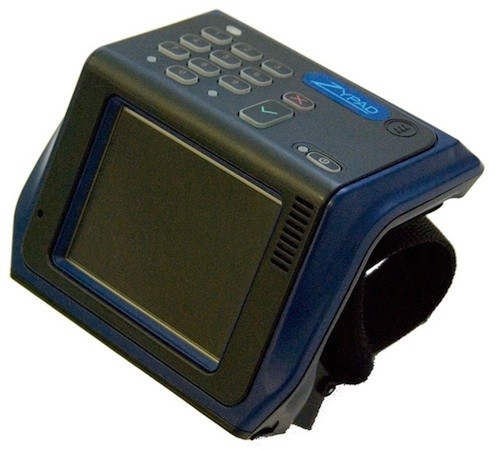 A wrist-mounted computer probably isn’t on your planned purchases for the year.  Regardless, we have a feeling there’s always going to be a very niche market for those who would like to wear a computer on their arm.  And the Zypad WL1500 sure makes your Fallout costume roleplay a much easier proposition.

Created by Eurotech, it’s designed for field workers who need access to information without losing any capacity for movement (and use of hands).  The press release lists such professions as emergency search and rescue, medical, defense and transportation.  We’ll add “geeks who like to pretend they’re from a bad 1950 sci-fi movie” to the list, but we’re guessing those types will likely just duct tape an Optimus One on their arm to do the same (which, honestly, sounds like a better idea to me).

The Eurotech Zypad WL1500 features a 3.5-inch resistive touchscreen display, with a numeric physical keyboard and a few extra buttons to go along with it.  All necessary communication protocols are supported, including WiFi, Bluetooth and cellular (3G, CDMA and GPRS), so your wrist can stay connected to the world at large, wherever the rest of your body is.  There’s also built-in GPS tracking capability, so Predators can find you when they need someone to hunt (yes, brother, you’re a part of the sacrificial team).

Onboard battery is supposed to last an 8-hour work cycle with moderate use, although it supports hot swapping in case you mistakenly left the 3G, WiFi and GPS radios on the whole day.  Charging can be done via USB.  Other features include Windows CE 6.0, 128MB of onboard storage, microSD card expansion, microphone, onboard speaker and an audio-in port.  You can also have it equipped with an optional barcode scanner.

Availability for the Zypad WL1500 is slated for the second quarter.  No pricing yet.