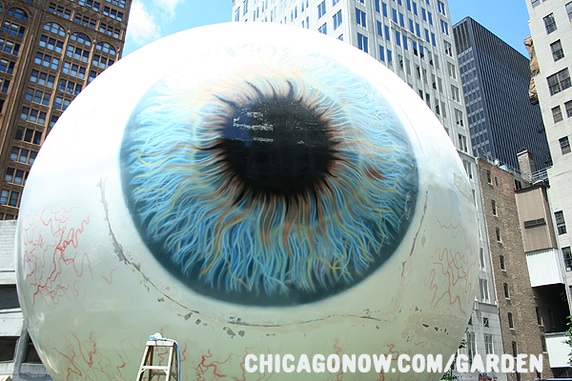 It’s official.  Your Aunt Sally no longer has the biggest eyes in Chicago.  She’s been pushed off the side by this: a giant 30-foot eyeball sculpture called…wait for it…EYE.  Tee-hee.

While masterminded by artist Tony Tasset, the actual sculpting and painting was taken over by Wisconsin-based Fiberglass Animals, Shapes & Trademarks (F.A.S.T).  The team built everything by hand, using approximately 9,000 lbs of fiberglass, 9,000 lbs of steel and, presumably, several hundred cans of paint. 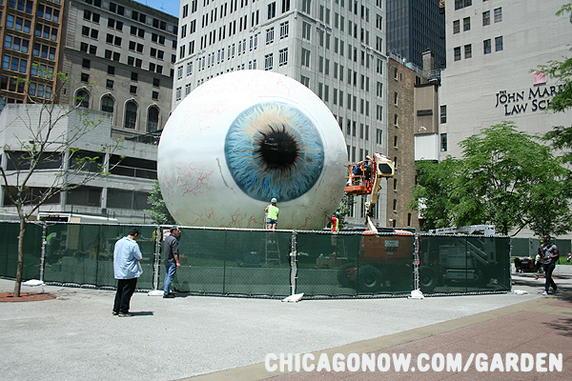 EYE was unveiled this Wednesday at Pritzker Park in Chicago’s Loop neighborhood.  Sporting a gigantic 30 foot frame, it comes adorned with a blue iris and blood vessels aching to pop out off the whites.  Instead of a fictional eyeball, Tony claims it was actually modeled from one of his own.  We’re not sure how he was able to take his eyeball out to study it, but we’re guessing voodoo.  Yes, it has to be voodoo.

The installation is founded by the Chicago Loop Alliance, a group of businesses that seek to draw attention to the area by organizing events and pop-up art pieces.  Already, the imposing structure is drawing attention and getting people interested to visit the park.

Not that everyone likes it.  “I think it’s awful,” opines Tony Dreibus, a local who lives less than a block from the park.  Well, tough luck, Tony.  Voodoo’s gonna get you now!

You can stare at the EYE and have it stare back at you until October.  Oh yeah, if you stare hard enough, all that voodoo is gonna melt you. You’ve been warned.