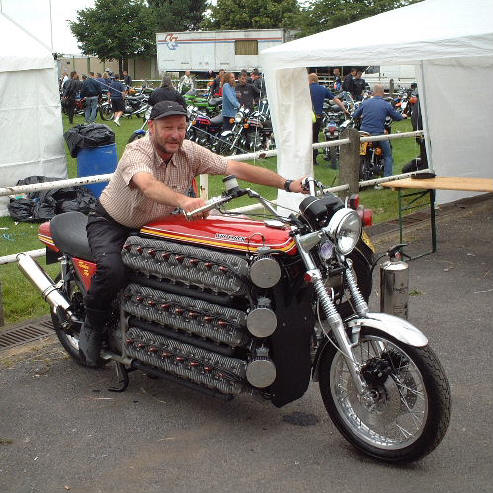 What’s the coolest way to kill yourself from a motorcyle?  Doing an Evel Knievel leap never hurt anyone’s style, but every bike-toting daredevil already has that corner firmly covered.  For you, we present this one-of-a-kind solution: do it while maxing the speed gauge on a 48-cylinder motorcycle.

While necessity may be the mother of invention, hogging the coolest contraption around sure counts as its doting auntie.  This 4200cc Kawasaki monstrosity is about as poignant a statement for that as you probably need.  Not only will it be a beast to control, the posture on that thing looks incredibly cumbersome.  If you don’t die from a crash, you’ll probably end up living through a life of lower back pain.

Designed by motorcycling madman Simon Whitlock, the bike is built from a series of  48 engines pulled from Kawasaki S1/KH250 (Triple) motorcycles.    Each 88cc cylinder from the original bike has been joined together to form six banks of eight blocks each, with every inline-eight functioning as its own complete engine (with its own crankshaft), tied together with gears.  It uses six Jaguar E-Type distributors, a BMW transmission and a 75cc pony motor under the seat for starting the whole thing up.

Can you imagine pulling up your three-wheeled scooter next to this thing?  You’ll probably feel so low you’ll want to hide under a rock for the rest of your life.  Check out the video below to watch the 48-cylinder Kawasaki in action.