Bat Umbrella Saves Gotham Citizens From Getting Drenched In The Rain 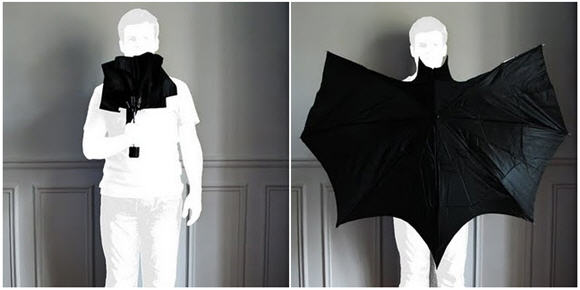 If getting wet is a crime then Batman would totally save the day with this Bat Umbrella.  Yes, it’s an umbrella in the shape of a bat, like of all of Batman’s toys.  I always figured the Caped Crusader’s suit was water-repellent.  Just in case it isn’t, though, this rainy day accessory would be an awesome Batgadget to add to his arsenal.

Okay, it wouldn’t be that awesome.  In fact, that thing looks too big to hang around his belt like the rest of his crimefighting contraptions.  Unless he begins carrying a purse and starts calling himself Batgirl, that is.

There aren’t much details available for the Bat Umbrella, but it appears to be a personal project of sorts from French designer Maxime Pécourt.  It looks like a regular handheld canopy when folded, but unfurls into a gorgeous Batman logo when “activated.”  I doubt that cover can keep you very dry in the rain (the shape is retarded for shielding you from downpour), but you’ll easily be the coolest-looking wet dude this side of Gotham City.

Seriously, though, I think somebody should sell it.  Even if you never use it to keep the downpour at bay, the pop-up Batman logo is just too cool to pass up.