Brain Athlete Measures And Records Your Mental Activity During Sports 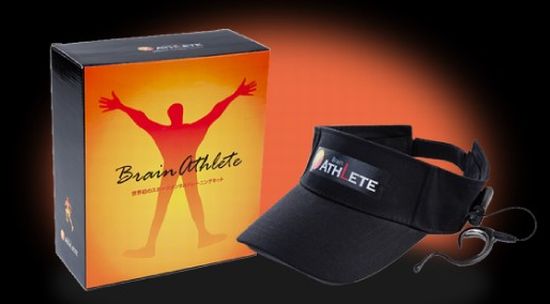 When you’re in the zone, you’re unstoppable.  Out of it, you’re just another random dude in the court.  For many athletes, finding ways to get in that flow state can mean the difference between victory and defeat.  The BrainAthlete seeks to help in measuring what goes on in your head during those special times to help you recreate them.

Created by Neurosky, the wearable tech is actually a brainwave device used to measure and record your midichlorian count during athletic performances. And You can use its output as valuable data to help you in the mental aspects of competitive play.

Clad as a standard golf visor, the BrainAthlete comes fitted with non-invasive sensors that monitor EEG electrical activity throughout a game.  Results are sent over Bluetooth to a nearby laptop, where your trainers can analyze what’s happening in real time.  This data, when used with the included applications and other training review materials (e.g. videos), should be able to give you and your coaching staff some idea about how your state of mind affects your game.

According to Neurosky, they’ve been working with the US Olympic Archery team over the last four years, honing the technology to make it usable for a wide range of athletes.  Yes, even your ilk who spend days playing Black Ops on Xbox Live.