Build Yourself A Gadgety Thingee 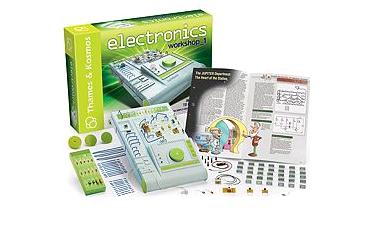 If Steve Jobs or Steve Wozniak had one of these as a kid, we might have had the iPod ten years earlier.  It’s the Electronics Workshop and it’s the greatest gift you could give to a kid that had circuits and diodes on the brain.

With 148 different experiments from a simple circuit to a lie detector your kids will learn how things work, while having fun at the same time – as the kit’s experiments are laid out using a robot in the year 2069 named Robert M-3 who is engaged in an apprenticeship on a giant space station that is orbiting earth.  As he conducts experiments, under the expert tutelage of his mentor Sirius Armstrong, your child will be able to follow along and learn how to fix your most complicated electronic gadgets.

So, set your kids up with a toy that is actually educational and help them design experiments, create cool gadgets and fix all your broken stuff.  Or they might invent something amazing and make you rich beyond your wildest dreams.  I mean…one can hope, right?