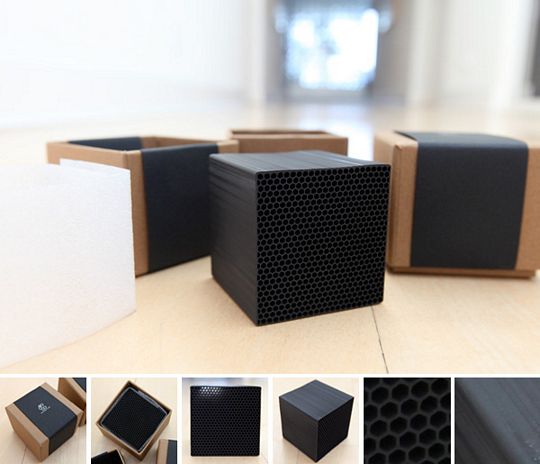 Chikuno Cubes are gorgeous the first time you lay eyes on them.  Often mistaken for a wide variety of things from satellite speakers to pen holders, they’re actually small home accessories that freshen up the air.

Made from the ultra-fine powder of bamboo charcoal and clay minerals, each cube is an all-natural creation with superior absorption capabilities, drawing in all the odors from the area surrounding it.  According to its creator, the Chikino Cube’s secret lies beyond the materials used to fashion it, though.  Instead, the real innovation is the micro-honeycomb structure.

While the cube itself measures two inches on each side, the honeycomb design allows it to have a surface area equivalent to four football fields.  That means, you have that much material absorbing all the stench and stink anywhere you station it.  Apart from the typical odors, it should also be able to relieve areas of toxic smells, such as formaldehyde, toluene and similar harmful chemicals.

Each Chikuno Cube can reportedly last for up to a year.  You will need to leave it out in the sun for six hours every month, though, to allow it to release all the spunk it has collected.  The air freshener works best when used in small, enclosed spaces like closets and refrigerators.  For larger areas, you can get the same results by using three or more Chikuno Cubes.