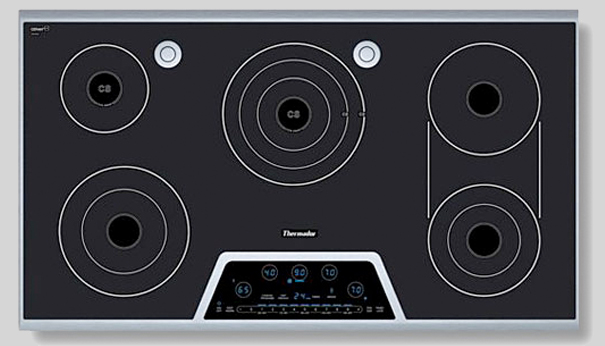 An increasing number of fashionable-looking cooktops have been hitting the market lately and Thermador is among the culprits responsible for their growing minions.  Seriously, Thermador’s electric cooktops not only sport striking looks, but pack even more forward technology than many modern devices.

Sporting fine-lined geometric shapes and touchscreen controls, the Professional and Masterpiece electric cooktops (like the one above) look like ultra-hot DJ rigs ready to pump tunes at some upscale club.  Instead, though, they’re designed to make cooking less of a ruckus at kitchens the world over.

If you’re a bad cook and often encounter problems with pots boiling too hot or too little, Thermador’s Sensor Dome is there to the rescue, measuring and regulating temperature all on its own.  With separate controls for each cooking zone, you can literally work on several dishes at the same time, letting you churn out multi-course meals with little worry.

Don’t know how high heat should be with some dishes?  Pick one of the pre-programmed settings and let the cooking gadget decide it for you – just dump in the ingredients whenever necessary.

Seeing these cooktops make me depressed for my own kitchen.  While I’m pretty certain they won’t outfit me with magical cooking abilities, I can at least be cooking in style.  Prices for Thermador cooktops vary, although, they’re usually in the higher ranges.  Expect to fork out from $1600 onwards.