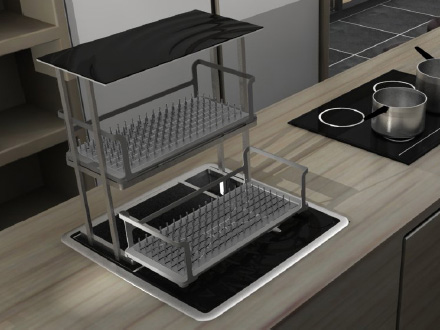 Ultrasonic cleaning is nothing new.  In fact, we’ve seen several consumer devices purport to do that over the last couple of years.  Still, the technology hasn’t made its way into many of the regular machines we work with, much less in home appliances.  As such, finding new ones like the De Dietrich Oris dishwasher remains quite the event.

If you’re not familiar with ultrasonic cleaning, it’s the process of washing an item using ultrasound.  That means no detergents, no water and no rinsing – just good, old 21st century technology running its course.  It works by bombarding the object with ultra-high frequency sound, eventually creating tiny bubbles that effectively scrub the area clean.

The dishwashers themselves aren’t all that amazing to look at.  In fact, each one looks like a bed of nails installed on a tray.  Still, the lack of a need for a water supply and cleansing agents sounds like they capably make for a simpler kitchen.

Since the use of ultrasonic cleansing has been restricted (for the most part) to the tech and jewelry industries, building it into products probably remains quite expensive.  In ten or fifteen years, however, I wouldn’t be surprised if it becomes the standard way of laundering stuff up.   You bet your ass (not to mention, mine) I’ll be installing an ultrasonic bidet the moment that happens!

De Dietrich claims that the Onis dishwasher, compared to current home devices, should cut down the time required for cleaning duties in half.   Pricing isn’t clear, but these are high-end French-designed appliances, people – your pockets will bled dry.