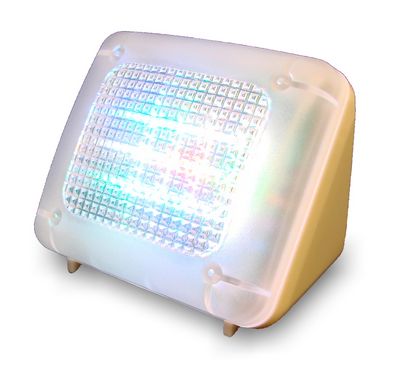 Having people inside your house will logically make the chances of being burglarized a less-likely outcome. If you can’t get someone to man your fort while you’re away, though, the Fake TV offers a possible avenue for creating that same impression.

You know how some people automate their home lighting to turn on at specific times to pretend the house isn’t vacant?  This thing works the same way.  Except, instead of just loungeroom lights, it mimics the light produced by a real HDTV, so anyone passing by will think there’s someone inside numbing their minds at Jersey Shore replays on MTV.

The Fake TV is, basically, a lighting system in a box (they say it’s no bigger than a coffee cup) that simulates the light output you can expect from a 27-inch HDTV when viewed from outside with the blinds closed (it supposedly simulates scene and color changes, fades and on-screen motion).  A built-in light sensor allows it to detect when it’s dusk, at which point it will turn itself on, while the onboard timer lets you configure when it will turn off.

While you can probably have one of those fancy new TVs to wake up regularly, those things consume serious electricity.  Designed to save energy, the little burglar deterrent will do its work while consuming no more than a regular night-light, making it a considerably more economical choice.

Granted, not having any sound might clue a more clever criminal element into what you’re doing.  Then again, it might not, so it could be a worthy play.  The Fake TV is available in charcoal and ivory, priced at $29.95.