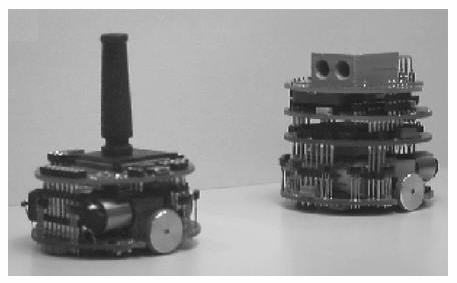 Do you think Robots are dumb?  Well, throw in neural networks and random mutation and things change rather quickly.  According to a bunch of Swiss researchers (who are not really mad scientists), the experimental droids eventually developed adaptive abilities, evolving a whole new set of skills such as finding their ways through a complex maze and (gasp!) hunting for prey.

According to Dario Floreano (of the Ecole Polytechnique Federale de Lausanne) and Laurent Keller (of the University of Lausanne), in their paper published on PLoS Biology, a series of experiments in robot development turned up the apocalypse-heralding result.  Yes, piles of steel and electronics can evolve using natural selection – the way we always imagined our robot overlords to have come from.

Each robot in the experiments started out with a different randomly-generated genome, giving them unique behavior and abilities.  The Swiss team imitated Darwinian selection, allowing only those that showed good maneuvering skills to procreate.  To create the next generation, the selected automatons had their neural net connections mixed, eventually passing on the resulting traits to their robotic offsprings.

Within 100 generations or so of the different experiments, the robots have managed to evolve traits that can be described as intelligent.  One group, for instance, gained the ability to avoid collision, making their way through mazes without hitting any wall.  In an experiment that involved robots pushing discs to get points, those of a similar genome (relatives) began ganging up to push larger discs, working together to earn points for the group, sacrificing individual “glory.”  In another, some managed to develop “spider-like” hunting skills, lying in wait to pounce on other robots.  In turn, their prey evolved detection abilities, quickly spinning in place to reduce the chances of being approached from an angle that’s away from their sensors.  Yikes!

If you ever thought the idea of robots developing socially-useful skills on their own was silly, now you know:  it only takes a team of mad Swiss scientists in a lab under a dormant volcano to give them the ability.  Freaky, right?