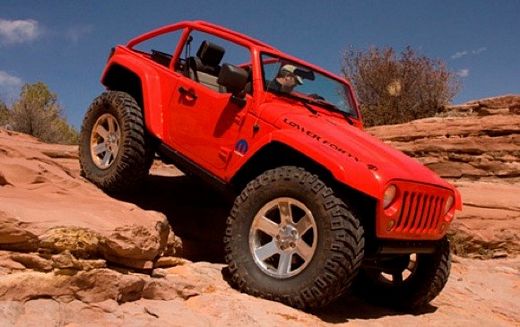 Last week’s Moab Jeep Safari 2009 almost came and went with nary a dent in the automotive media.  As usual, though, it was filled with hardcore off-road enthusiasts, toting a number of exciting vehicles out on display.

Out of all the trucks that took to the desert sand, though, few garnered as much attention as Mopar Underground’s Jeep Lower Forty.  Built out of a Jeep Wrangler Rubicon with plenty of hack-and-saw bodywork, it packs over sized aggressive tires and plenty of ground clearance.  Mopar’s modified stance made it look more imposing from every angle while managing to perform the upgrade without adding suspension lifts.   I’ve seen a lot of tuned out Wranglers with over sized wheels and they all look tacky next to this.

Under the custom carbon-fiber hood , Mopar fitted the rough rider with a 5.7-liter Hemi V8 with six-speed manual transmission.  Windshield frame has been chopped down three inches shorter and pulled back by ten degrees, creating a sportier look for the vehicle.   Other changes include a drop-down tailgate and custom paint finish called Red Eye No. 3.

Wranglers have always looked tough, but Mopar’s updates turned out a beastly ride that made it look ten times better.  Sadly, the vehicle is just a one-off that Mopar is doing to help develop their performance parts and accessories.  After seeing the Lower Forty, though, I wouldn’t be surprised if someone commissioned them to custom-build one of these.