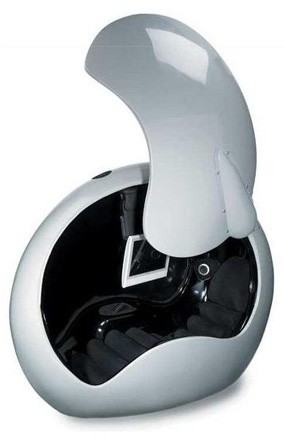 It’s no secret that sometimes, people just want a little privacy. They want to be left alone in the comfort of a secure place. Psychologists may theorize this is a subconscious attempt to go back to the womb, and perhaps that’s what the makers of the Ovei Life Pod were thinking of. Especially in this increasingly technology driven world, if you’re a teenager being sent to your room, you may have your entertainment, but curling up into the fetal position can only simulate the warm protection of pre-birth existence to the extent of your flexibility.

The mind boggles when trying to come up with any other use for this gadget, but the Ovei Pod from Oculas Group is too neat not to try out while you consider the ramifications of a home condensed to one little pod. The picture just doesn’t do justice to how much stuff is included in the pod. Inside, you’ll find a 5.1 surround sound system, a 26” LCD display, climate control, as well as a host of other goodies.

If the absurdity of clinging to your long gone lifestyle as an unborn doesn’t appeal to you, consider this. The Ovei Pod, with its stellar entertainment system, is the perfect gadget for someone that wants to immerse themselves in a film. The isolation maximizes acoustics, and the images from the 26” LCD screen will seem larger than life thanks to the forced perspective.

At $100k, the price tag will make some balk, but the Ovei Pod wasn’t made for the faint at heart or the light-weight in cash. This is a gadget for those who both want a stellar entertainment experience and have the disposable cash to afford it. One thing to consider, however, is that the experience of the Ovei Pod is so consuming, you won’t notice anything outside the Pod until you exit, and that can mean danger for you. What if some catastrophe happens, and you’re inside, blissful and unaware until you come out (assuming you ever do)? Never fear. If you can afford the Ovei Pod, chances are you can afford a touch of security to keep you informed should the world end.