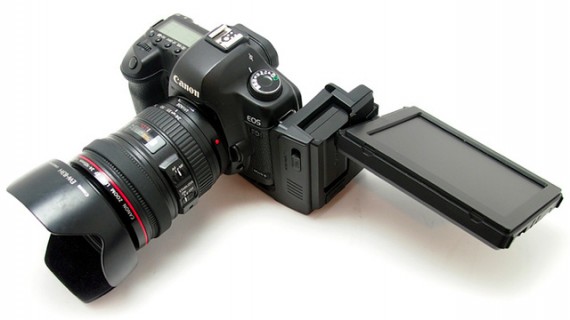 Digital cameras get more awesome with each passing week. Their LCDs, though, remain small, which isn’t really an issue for most folks. If you do put value in seeing your live previews in as big a display as possible, on the other hand, then you’ll probably want to clear space in your camera bag for the Swivi.

An add-on swiveling display, it attaches to your DSLR’s tripod mount and HDMI-out, giving it a larger secondary display panel. Oh, you have one of those ancient cameras with no HDMI port? Sorry buddy, but you’ll have to make do with what screen size you got.

The Swivi is a 5.6-inch display panel with an 800 x 600 resolution and a 4:3 screen ratio. While it adds a mighty bit of size to the camera, it also gives it plenty of flexibility, with the display able to swivel up to 180-degrees both vertically and horizontally. That means you can fold into your camera when not in use, then fold out and turn as needed during a shot. Not only will the bigger screen allow you to frame and focus more accurately, it also makes keeping track of difficult positions, like low angle shots (just flip up the LCD to face you looking down), easier.

Features don’t end there, either, as it also provides peaking focus, zoom functions, and built-in speakers for playing back recorded movies. It requires either a Canon LP-E6 battery or 6 AAAs (using an included adapter) for power.

Want one? The Swivi is available directly from its creators, priced at $330.