Take Your Work With You For Way Cheaper 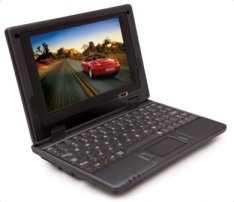 Are you tired of staying at the office all day because you can’t take your work with you? Are you frustrated because you have to leave all of your technology at work because it’s too cumbersome to take with you? Maybe you decided to attempt to circumvent that problem by purchasing a laptop, but those things are still quite clunky when you’re already carrying so many other things. Men and women on business trips understand that compact gadgets are what sustain them on the many miles of success. They need something small but with the power and all the capability of their laptop’s business functions.

So the business world will rejoice when they find the Razorbook 400 CE, released by 3K Computer. Netbooks seemed the wave of the future, but already this gadget is pushing those fan favorites aside in favor of this new creation.

Priced at a mere $150 retail, you hardly need to wait for a sale. Netbooks run for at twice that much, even when on sale, but won’t do much more. The Razorbook 400 CE may seem familiar, and that’s because it is an upgrade over the RazorBook which debuted last June. The Razorbook 400 CE features a user interface as found in Windows CE 5.0 while boasting Microsoft Internet Explorer, RDP (remote desktop protocol) client, Skype, and Windows Media Player alongside Adobe Flash support.

The Razorbook 400 CE utilizes the Ingenic 400MHz 32-bit single-core mobile processor, comes with 128MB RAM and 4GB flash memory, a 7″ WVGA TFT LCD display, Ethernet and Wi-Fi connectivity, an SD memory card reader, and a measly 2-cell 2100mAh battery. Those who bemoan the lack of trinkets that the Razorbook is too small to contain can rest easy knowing it comes with a trio of USB 2.0 ports, so any missing internal accessories can easily be hooked up.