Want To Know If Your Diamond Is Fake Or Not? 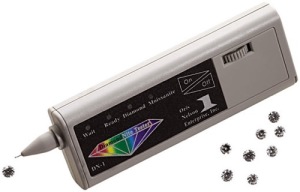 Want to know if he really loves you or not?

Envision a scene of such bliss you cannot imagine it ending any way but how you have planned. You invite your girlfriend to the perfect restaurant. As it happens, it’s the restaurant where you had your first date. You ask her to wear the same outfit she wore that time. You wear the same outfit you wore, too, at least if it still fits. You order the same food. You drink the same wine. And while your girlfriend begins to suspect all this planning must be leading to something, you go down on one knee, take out the little black box that will make her heart stop, and you open it to reveal an engagement ring.

“Will you marry me?”

She can’t conceal her joy at being asked, but as she whips out the Diamondite, it’s apparent she also can’t conceal her suspicion that despite your profession of love… you’re really just a cheapskate that won’t pay for a real diamond.

What is this gadget that has undone your attempt to save a few dollars while still taking a wife? What dastardly piece of technology has prevented you from having your cake and eating it, too? Why, it’s the Diamondite, a gadget women across the world will embrace.

This handy tool is a woman’s own personal stone inspection kit, allowing her to analyze the rock she just accepted so she can know if it is a true diamond or just some facsimile moissanite. It lets you know what kind of stone it is by a high-pitched beep and a light on the side of the gadget, displaying if that stone is a real diamond or some cheap knock-off.

For those women that think they CAN handle the truth, you can purchase the Diamondite for only $199.95.