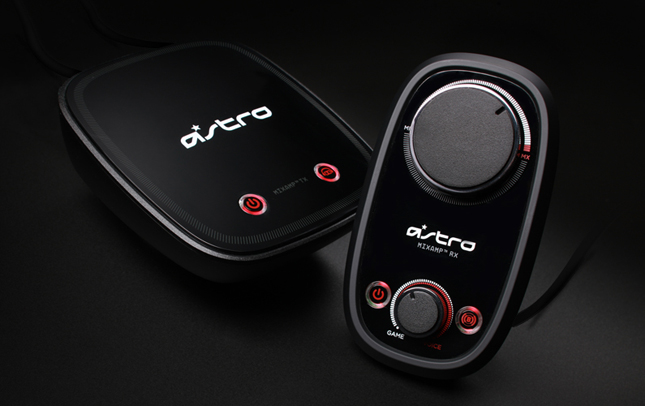 Astro Gaming has always held a lofty position among gamers and audiophiles alike for their excellent headphone solutions.  If there was one complaint, it’s the fact that none of their previous products came without a mess of cables.  That all changes with the Astro MixAmp 5.8.

No, it isn’t another wireless headphone.  Instead, it’s a wireless surround sound adapter where you can plug your wired cans.  Simply slip your favorite pair of headphones into the 3.5mm port, pop the device in your pocket and you can instantly walk around the room with 7.1 channels blaring at your eardrums.

The Astro MixAmp 5.8 consists of two parts: a transmitter base station that should easily blend in with your entertainment system and a receiver that you can carry with you.  Communicating over the 5.8GHz wireless spectrum, as many as four receiver units can connect to one transmitter.  Since it’s from a gaming-focused company, the setup can work with your PS3 and Xbox 360, too, allowing you to enjoy the full surround sound experience for both your movies and games.

According to Astro, the device is compatible with any headset, provided they can handle the corresponding amplification.  The receiver unit itself is styled like a slightly smaller version of the original MixAmp, complete with the large master volume knob and a game/voice balance controller.

You can get the Astro MixAmp 5.8 on pre-order now, priced at $100.  Price goes up to $130 when it finally ships in January, so it’s a good idea to reserve now if you’re planning to get one eventually.