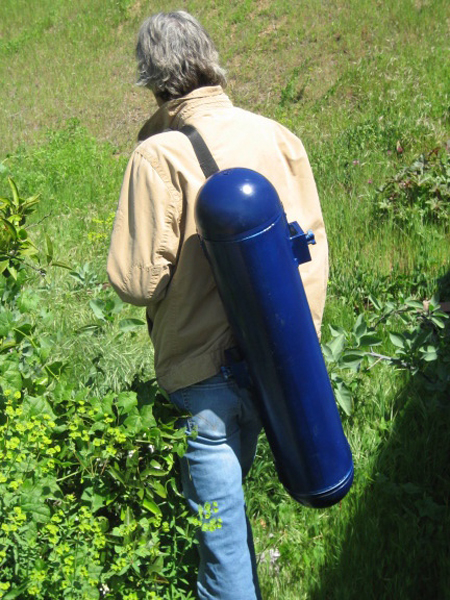 Solar panels are good for off-grid power.  Let’s face it, though: you need too much of them to generate anything that can sustain a comfortable existence.  The Backpack Power Plant (BPP-2) might be the answer, generating as much energy as it would require 60 square feet of solar panels to produce, all while measuring a mere three feet long.

A portable hydroelectric generator, the BPP-2 weighs a light 25 pounds, allowing you to hoist it on your back for easy transport.  It can operate in any stream of water that’s at least four feet deep.  While you can’t use it in the stale swimming pool in the backyard, you should be able to take it when camping with a river nearby, where the water flows at a minimum of 7.5 feet per second.

Despite the small size, the Backpack Power Plant is no joke, able to produce up to 500 watts of clean power with no heat or exhaust emissions.  According to creator Bourne Energy, it can be bottom mounted to a riverbed, allowing you to keep it away from sight.  Coupled with the quiet operation, it can perform its energy-supplying duties, all while being virtually indiscernible.

A military version of the rig is already out, which can operate even in lower flow rates.  The new model is aimed at civilians, though, who can employ it for personal or community use.  While this isn’t likely to be of much interest for city slickers (unless your underground sewers are over four feet deep with fast-running water), the value for remote villages and towns with no established power system could prove immense.

As such, that’s where Bourne Energy is hoping to market the Backpack Power Plant.  The rig is only in the prototype stage for now, but it’s definitely a huge step to those seeking out alternative means for off-the-grid power production.  They’re estimating pricing for the civilian version at around $3,000.