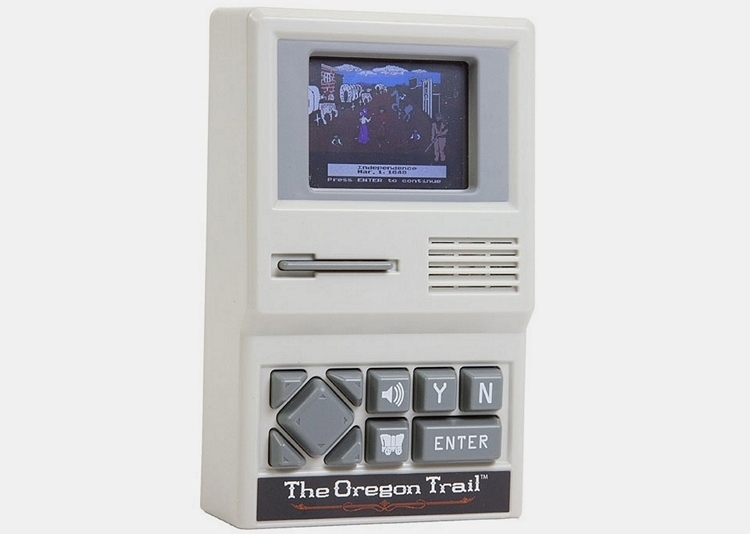 It may be over 40 years old, but The Oregon Trail remains playable at this day and age, making it a fun way to kill time on your phone either through an app or a web browser. But what if you want to play the darn game on a machine that truly reminded you of the old computers from back in the day? No, we don’t mean on an Apple II, but on this dedicated Handheld Oregon Trail Game from Basic Fun.

Why the heck would you want a separate handheld console that plays nothing but a 40 year old game? Well, we’re not really sure. What we do know is, we definitely wouldn’t mind having one of these on the desk within reach any time we want to die of dysentery. Or something. 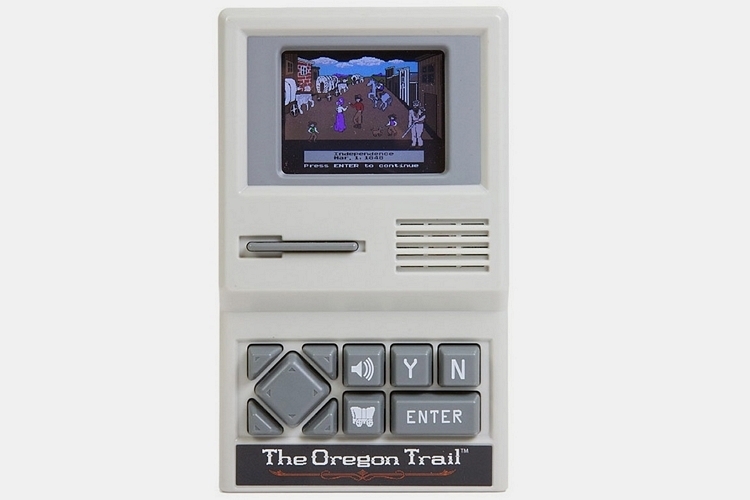 The Handheld Oregon Trail Game is a handheld console that’s styled like a miniature version of the Apple II computer, so it’s like you’re playing the game at the dawn of personal computing, albeit in a much more compact form. Heck, it even has a fake floppy drive with an equally fake disk inserted halfway into the darn thing. To the unfamiliar (just in case there are young people there unfamiliar with the game), the game charts out a group’s trek from Independence, Missouri to Oregon’s Willamette Valley during 1848. You know, those years before antibiotics were even invented, making death from dysentery a popular outcome of many people’s lives. You’ll have to monitor your supplies, optimize your travel pace, and make sure everybody’s doing well, so you can arrive to your destination safe and sound.

It comes with a colored 2.5-inch screen, so you’re not stuck with a “green foreground on black background” version of the game, allowing you to enjoy the rudimentary graphics in all its full-color glory. To make it more enjoyable, all those text and graphics are accompanied by chiptune music, although it does seem to have the option to turn the sound off, in case you want to play it while pretending to listen to a lecture in the hall. 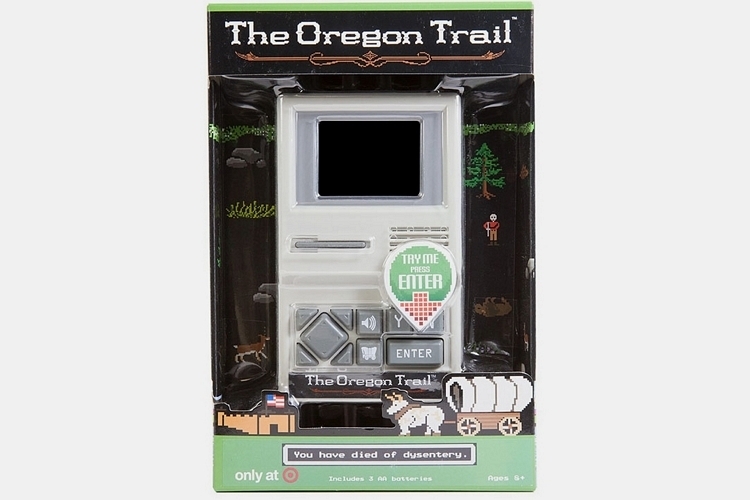 The Handheld Oregon Trail Game has large control buttons, which should be reminiscent of the keys on the Apple IIe’s keyboard, ensuring it will be appreciated by older folks who wax nostalgic about the computers they played with when they were younger. No, it doesn’t come with a full keyboard, but it does have all the keys needed to play: Y and N for answering Yes and No, an Enter key (we’re assuming in place of the spacebar), and directional buttons for going through lists of choices. We’re not sure what the wagon key is for, but we definitely love the fact that it’s there. We mean, it seems too appropriate.

The console itself measures 5.5 x 3.5 x 1.5 inches (height x width x depth), so it’s much bigger than your smartphone, making it a chore to bring along. If you enjoy spending your time avoiding dysentery, though, the extra hassle may be worth it. It uses three AA batteries to operate.