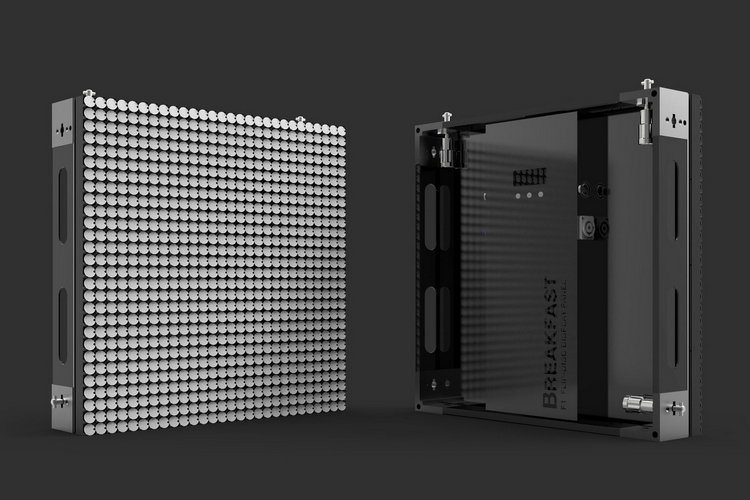 While flip-disc displays have, pretty much, been replaced by modern LCDs, there are companies still looking to keep them in circulation. New York-based Breakfast is one of those outfits and their Flip-Disc Display System brings serious innovation to the erstwhile disappearing technology.

Like other flip-dot systems, the electromechanical sign consists of a matrix of discs that can toggle between one of two colors to create various impressions across the panel surface. Unlike them, it can refresh its display at a rate of 30 frames per second, allowing it to show full-motion animations, making it useful for much more than signage at airports and public transport stops.

The Breakfast Flip-Disc Display System measures 17 x 17 inches and sports a 28 x 28 grid of mechanical discs. It comes with four standard options in disc colors: black/white, black/red, black/yellow, and black/orange, with special available finishes in silver, gold, high-gold, and metallic. The panels are modular, by the way, so you can line up and stack multiple panels to build any size of display you need, with a support bar that lets you mount it flush up a wall, hung off cables, or attached to scaffoldings.

Using the bundled software, the panel can be used to reproduce text, static images, and video files, with an interactive mode that allows it to reproduce whatever moves in front of its 3D depth camera. The same software comes with a built-in scheduler for queueing up the content it displays, with an API allowing developers to modify it to suit their specific needs.

You can get a quote for the Breakfast Flip-Disc Display System from the link below.