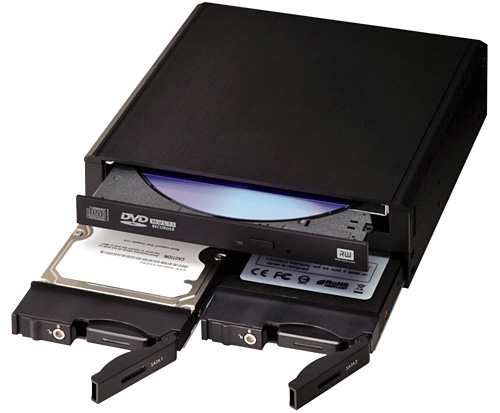 Desktop rigs are slowly going the way of the dinosaur.  With emphasis on slowly, by the way, since I still know plenty of folks who use one at work and even keep one at home.  If you’re putting together a new barebones box because you didn’t get the memo that PC gaming is dead, the Century CMRK-S20D could prove an interesting addition to your assembly.

Designed to slot into standard 5.25-inch bays, the hardware component adds a DVD drive and a pair of 2.5-inch SATA drive bays while using just a single rack.   You know, in case you’re using one of those smaller PC cases with just a couple of available racks for extra parts.

To manage the efficient use of space, the Century CMRK-S20D uses slim-profile components both for the DVD tray and the pair of hard disk slots.  Both disk mounts are accessible externally, making it easy to trade drives (probably no hot-swapping, though).  The dual SATA bays can take both HDDs and SSDs, while a 4-cm fan is integrated into the assembly to help cool down the disks during use.