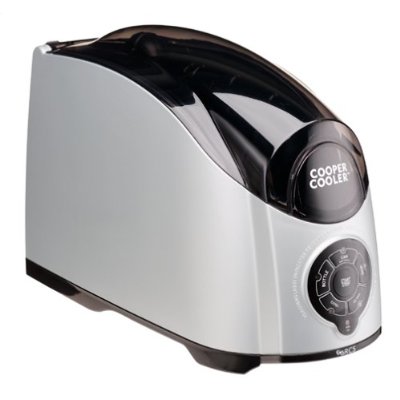 No more stocking up on cold drinks or waiting hours for one. As long as you remember to get your beer and soda from the grocery, you can be as lazy about piling them in the fridge as you want. When you get the inkling for a cold lig, just get your cans and bottles, fill the tray with water, add ice, plug it in the mains and spin 100 times. Sure, you can also just sit out the two-minute waiting time, but spinning 100 times makes it feel like magic. Guaranteed.

The Cooper Cooler Rapid Blitz Chiller uses a patented chilling process that allows it to perform its magical cooling powers without making your drinks explode upon opening. In two minutes, it can chill a single-serve can from 77-degrees to 38-degrees and a bottle from 77-degrees to 41-degrees. Wait four minutes (spin 200 times) and it will be even colder, up to 33-degrees for cans and 36-degrees for bottles.

Measuring 14.5 x 6 x 9 inches (l x w x d), it’s very portable too. As long as you have a slot to plug it in, you can have cold drinks without foaming at the mouth waiting for one. It turns off automatically, as well, once the time you set (either two or four minutes) is done.

Perfect for those impromptu drinking sessions at the office when the boss decides to leave home early, the Cooper Cooler Rapid Blitz Chiller is available for $49.