Circle Board Welds Nine Skateboards Into One Huge Rig, Gets Ridden On Video 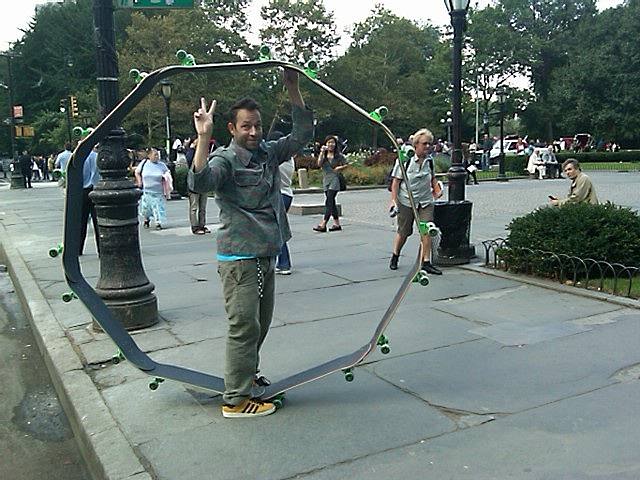 Skaters can get pretty crazy on their own. Throw them a rig like this Circle Board and it could make for a lot of fun tricks. We said “could,” not that they necessarily will.

In the video at the bottom, you can see skater Anthony Pappalardo attempt to ride the thing with very limited success. Duh. A giant hamster could have done better than that guy. Or maybe not. That thing looks unstable as hell.

Created by skateboarding legend and artist Mark Gonzales, the Circle Board was built as a sculpture project of sorts for his exhibit, Round n’ Round, which has been showing at the Franklin Parrasch Gallery in NYC since October and goes on till the 28th of this month. It’s made up of nine fully-functional skateboards attached at the ends to form a nine-sided semi-circular loop of madness.

It looks impossible to ride, but the artist showed off some masterful chops handling it during the last part of the clip, expertly rolling over a sidewalk while smoking a cig. If one doesn’t kill you, the other will. Livin’ on the edge, baby.

With some practice, a less wobbly frame and an inebriated brain, perhaps, some folks can do mighty fine things with this. Maybe ride it like a hamster wheel, spin it like a hula hoop and finish off by crashing it into a half-pipe. I’m sure someone can be persuaded to set it on fire and streak down a sloped road too – sounds like a win to me.

Check out the Circle Board video below.