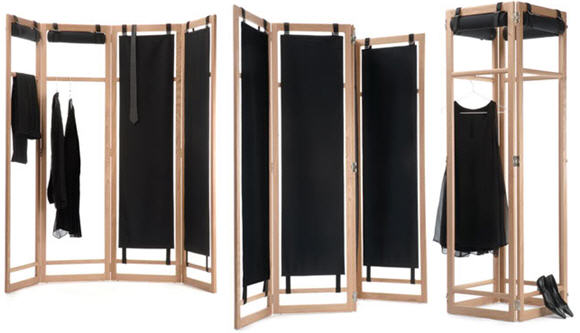 Dividers, for the most part, serve a single specific function, allowing you to add some amount of separation to a wide open space. This prototype Screen from designers Livia Lauber and Loris Jaccard, on the other hand, adds a number of potential configurations to run-of-the-mill room dividers, turning it into a versatile and good-looking home fixture.

Presented as part of an exhibit called Assemblage from last year, the Screen features an “assembly” of functions. At its base form, it can be used as a room divider. Roll up the blinds and the exposed frame becomes a clothing rack. Wrap it around a corner and you’ve got a makeshift room. Set it in an enclosed position and you’ve got an old-school phone booth, allowing you to quickly slip into your Superman suit (assuming you’re Clark Kent, of course). Heck, you can set it horizontally in closed position and turn it into a makeshift trunk.

The Screen features four vertically-inclined rectangular panels, each measuring 180 x 50 x 2 centimeters. Frame is built out of solid oak, with textile blinds held along the wood with nylon straps. The blinds can be rolled up and fastened to the top of each frame, exposing a hanging rack (along eye level) and a shoe rack (near the bottom).

Overall, it’s a clever update to room dividers that, potentially, make it useful for a lot more than apportioning space. Even better, it looks like a doable-enough weekend construction project, if you’re so inclined (partaken with a beer and a Bottle Opening Hammer, of course).

[Design Yearbook via Loris And Livia]